“SHE LOVES ME” at Scripps Ranch Theatre 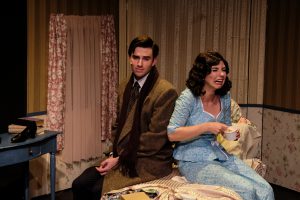 From a perfume shop to a leather goods store to a boutique book emporium. The setting of the story has changed over the years, in its various incarnations.

The 1937 Hungarian play, “Parfumerie,” inspired the  1940 film,
“The Shop Around the Corner,” and the 1998 blockbuster “You’ve Got Mail.” One of the most charming adaptations is the 1963 musical, “She Loves Me,” with music and lyrics  by Jerry Bock and Sheldon Harnick, the team that gave us “Fiddler on the Roof,” and a book by Joe Masteroff, who wrote the book for “Cabaret.”

It’s obviously an irresistible story. Two young people, mutually antagonistic, work together in a sop. Each is consumed by a penpal correspondence with an unknown person whose letters are intriguing and seductive. After a number of false starts, the mystery writer turns out to be the daily antagonist – and after the initial shock, love ensues.

The musical isn’t often produced. The score is challenging and requires a number of exceptional vocalists. To some the show may seem quaint.

Scripps Ranch Theatre has mounted an outstanding production, and made the musical sing again. The cast is marvelous, offering wonderful work with solos, duets and a capella numbers.

All six of the parfumerie employees get knockout numbers that spotlight their prodigious talent. Adorable Luke Monday and Taylor Magee in the lead, joined by Tanner Vidos, Joseph Grienenberger, Josh Bradford, and funny Tara Sampson – all surpass expectations. Danny Campbell is totally credible as their well-meaning but misguided boss, and an ensemble of seven skillfully sings, dances and plays multiple roles.

Excellent leading man material, Monday also gets an offstage moment to display his expertise on violin. Thoroughly engaging Magee nails that high B in the deliciously comical “Vanilla Ice Cream.”

The set transforms expertly to several locales. The costumes are period-perfect.

All told, a nostalgic European backdrop for an enchanting, amusing romance.