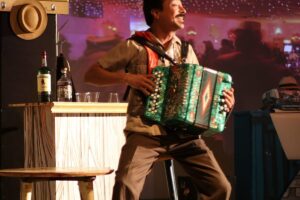 It isn’t the first, and it won’t be the last. But it is the most flexibly accessible.

There are three ways to enjoy the weekend Festival (9/3-5), which celebrates the work of Latinx playwrights from across the nation:

You can attend the event live (while the REP space is undergoing renovations, the Festival is being held on the campus of SDSU, further cementing the REP’s relationship with the college and its Theatre Dept.); you can watch it live online; or you can watch a recording of the live event, available On Demand until 6pm on Monday, September 6.

The event is presented under the umbrella of Amigos del REP, a theater advocacy council of community members and artists who promote Hispanic/Latino/Chicano theater at the REP. Amigos del REP was founded by Herbert Sigüenza, but the Festival was the brainchild of REP artistic director Sam Woodhouse.

Everyone is talking about diversity and inclusion these days, but the REP has been at the forefront of diverse programming for a long time, practically since its founding in 1976, by Woodhouse and D.W. Jacobs. Since moving to the Lyceum Theatre downtown in 1986, the company has produced 51 mainstage productions by Latino playwrights, as well as providing residencies for a wide array of Latinx theatermakers.

“Ten years ago,” says Woodhouse, “I began dreaming and working towards the day when the San Diego REP could present a festival of readings of plays by Latinx writers, featuring Latinx performers. When Patrice Amon joined the staff five years ago, we began to plan such a festival. The vision, hard work and outreach of Patrice has built this event into one of the premier festivals of its kind in America.”

“It was life-changing to see stories that reflected my culture,” she says.

She went on to study Political Science and Philosophy at the University of San Diego, and then received a Law degree from Cal Western. She never even sat for the bar. By then, she had realized where her passion lay, and had already been accepted to a doctoral program at UC Irvine. In a joint program with UC San Diego, she completed her Ph.D. in Critical Theory and Chicano Studies.

“I’m a terrible actor,” she confesses. But she’s a natural teacher, currently an assistant professor at CSU San Marcos, specializing in Chicano Theater and Latinx Theater. She also directs shows there and teaches a Disney course.

At 38, Amon has worn many theater hats, but this is her first time producing. Her offical REP title is Associate Artistic Director and Latinx Projects Producer.

Her own heritage, she says, is “half and half.” Her mother is fourth generation Mexican American (her great grandmother was born in New Mexico in 1911); her father’s family is white, from San Diego and San Bernardino.

“Spanish was removed from my family in the 1940s,” she reports. “My grandparents desired acculturation. As a result, my Spanish is very formal, not super-colloquial, with a South Bay accent.”

Her Spanish, English and dramaturgical skills allowed her to sift through 90 submissions to this year’s festival, mostly from the U.S. But she wasn’t alone.

“There was a very broad committee—close to 80 people—that began reading submissions in January 2021. Usually, it’s more like 20, but this year, with the pandemic, there were a lot of people with a lot of time.”

There were three culling rounds from the all-volunteer group, to narrow the winners down from 90 to four.

Amon is directing the final play of the Festival, “A Skeptic and a Bruja,” by Rosa Fernandez.

“It’s a wonderful play,” Amon says, “and a spooky story. A woman of color is working in a lucrative B&B, when she starts having paranormal experiences.”

The main character, Priscilla, calls on paranormal investigators Sam and Jess, from the agency A Skeptic and a Bruja, to help her.

“The three women pull power from each other, working against an unnamed dark face,” Amon explains. “It’s a little like [the award-winning 2017 movie] ‘Get Out,’ in that it has racially-aware horror elements.”

Fernandez, an associate member of the Dramatists Guild, is an emerging playwright from Buffalo, NY.

“She writes in a fun and eclectic style,” says Amon. “I love horror stories, and a good play in the horror genre doesn’t come around much in theater.”

On Friday, September 3, after a Welcome Reception and a Directing Panel, the Festival opens with “Black Mexican,” by Rachel Lynett, a queer Afro-Latinx playwright who writes dark comedies about complex, complicated women of color. She’s already had numerous readings, workshops and commissions.

“The play takes place in Academia, and is based on a real-life occurrence, that you probably read about in the news,” says Amon.

“Here, it’s a professor in Latin American art, who challenges one of the students being admitted to an art exhibit. There’s the question of Hispanic vs. Latino vs. Caribbean. Ultimately, we learn that the professor is ‘Black-fishing,’ which refers to someone outside a racial or ethnic identity pretending to be part of that identity, altering their dress, speech, hair choices, etc.”

The question the play asks is, ‘Who gets to be a part of Latinidad?’ As the women in this play discover the truth about themselves and each other, they have to face the internal bias that allowed a white woman to be Cuban, but didn’t allow a Belizean to call herself ‘Latine’.

Performing on Saturday, September 4 is “Get Your Pink Hands Off Me Sucka and Give Me Back,” by Daniella De Jesús, a graduate of NYU’s Tisch School of the Arts who hails from Bushwick, Brooklyn. As an actor, she played Zirconia on Netflix’s “Orange is the New Black.” As a writer, she was a member of the Public Theater’s 2018-19 Emerging Writers Group, has had her plays produced since, and is creator of a new web series, “Talk To Me” on IGTV.

“It definitely is the award-winner for longest title in the Festival,” quips Amon. “It’s so brilliant and smart, a satire about Columbus’s first voyage.”

While studying abroad in Spain, Solandra, a young Dominican-American, finds herself alone in the throne room of Queen Isabella and King Ferdinand, whose portraits come to life and transport her back to 1492. Meanwhile, on the Caribbean island we now refer to as Hispaniola, Anacaona awakens, terrorized by a violent nightmare, which she soon learns is a prophetic vision. As Anacaona struggles to save her community from invasion, Solandra is contending with her own racial identity, as well as her attraction to older white men and their attraction to her.

“It’s got a little Pocahontas motif,” says Amon, “and some ‘West Side Story.’ It’s about the way we fetishize and exoticize young Latina women. It’s very funny, kind of in the style of ‘Culture Clash.’ Daniella is the closest we have to a celebrity in the Festival, because of her appearance on ‘Orange is the New Black.’”

Also presented on Saturday (9/4) will be “(trans)formada,” by lily gonzales, a Texas playwright who trained at UT Austin. Their work has been developed or read at a number of prestigious theaters.

“I’m excited to feature this play,” says Amon. “It’s about a young person finding their gender identity. It’s sort of a coming-of-age story, set in the Texas Hill Country. Sam is a young, queer, Latinx child of Mexican immigrants. At first, Sam uses ‘she’ pronouns, then gradually takes on ‘they’. Just as Sam is building up the courage to present their gender to Mom, a high school party becomes very revealing. Seeing Sam’s family’s move toward support and acceptance is really wonderful.”

Every year, the Festival presents four full plays and one solo show.

“We were searching for a strong solo piece,” says Amon. “I had seen Nicolás Ramiro Valdez’s piece, which had been performed and recorded in Texas.”

Unlike the other offerings, this piece is not being developed at the REP. Valdez is part of the Guadalupe Center Cultural Arts Center in San Antonio.

His solo play, ‘Conjunto Blues,’ is about how he became a Conjunto musician.

Conjunto is a music form born in south Texas at the end of the 19th century, after German settlers introduced the button accordion. In addition to the accordion, Conjunto quartets also include a Tololoche (upright bass), a bajo sexto, a 12-string Mexican guitar, and drums.

This deeply personal performance takes audiences through a shifting landscape of memory and reflection, bringing to life a host of colorfully poignant characters. While exploring the social and historical conditions that led to the development of Conjunto music, Valdez also shows how it’s an expression of cultural resistance and liberation. He and his band will be here in San Diego, playing live.

“The music is a conversation between the instruments,” explains Amon. “The musicians feel the rhythm and riff off each other. Valdez is a master accordion player, who was introduced to Conjunto at an early age, since his grandfather was a Conjunto music aficionado. The music has a playful, soulful style.”

Valdez has developed his own unique style of Conjunto, incorporating music, poetry and theater into culturally-relevant performances that speak to the experiences of communities along the U.S./Mexican border.

“I’m really excited about the hybrid aspect of this year’s Festival,” says Amon. “Last year, it was exclusively online — and our audience, typically around 200, grew to 600. Online presentations offer a great opportunity to connect with audiences across the U.S. and the world.

“But I’m equally excited by be back in person, to share the space together, to hear the audience responses. It’s been a very long quarantine, and we’ve all missed sharing that experience. But our goal is to make audiences feel safe and welcome, and to allow them every opportunity to have access to the wonderful work we’re creating.”

The Latinx New Play Festival, a hybrid event from the San Diego Repertory Theatre, will be held In-person and online, September 3-6, 2021