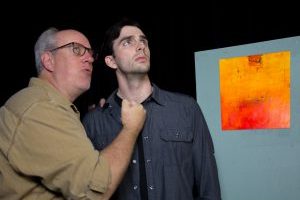 What does RED mean to you? Blood? Passion? Roses? Wine? Anger?

That’s a critical question in John Logan’s Tony Award-winning 2009 play, “Red,” which is all about color and light and art and ardor.

The central figure is abstract expressionist painter Mark Rothko – and so much more. Many of the character’s lengthy, intellectual, pedantic/artistic disquisitions come directly from the artist’s esoteric writings.

If you now something about art, you’ll experience the drama on a deep and incisive level. But you don’t need to know a thing about painting to appreciate how an artist feels about his work. And you can approach it the way Rothko wants his work to be appreciated:

“Let it work on you. Let it wrap its arms around you. Lean into it. Engage with it.”

The time is the mid-late 1950s, when Rothko was also in his mid-50s (he killed himself at 66). At this point, he was a recognized artist, but he remained competitive (especially with the much-heralded Jackson Pollock),  He’s just been given a huge, high-paying commission: to paint a series of murals for the new Seagram Building in New York __ to grace the walls of the chichi Four Seasons restaurant within.

But his mood is already turning dark. He realizes that his time is passing. Just as he and his peers had deliberately pushed out the Cubists, the pop art of Warhol and Lichtenstein are shoving his work aside.

This notion of old vs. new is central to the artist (protagonist) and his antagonist: a fictionalized, composite of an assistant. Ken rebukes Rothko as a self-important solipsist and a hypocritical sellout for accepting the highly commercial commission for the Big Bucks.

The ‘divergence’ theme is echoed in considerations of youth vs. age, old and new artforms; light vs. dark, life vs. death (echoed in Rothko’s obsession with Red, the life force, vs. Black, death); and the distinction, as in the colors and in Rothko’ self-perception vs. Pollock in terms of the two mythological sons of Zeus: Apollo (reason, logic, intellect) vs. Dionysus (emotion, instinct, chaos); and Art as commercial vs. a personal, spiritual experience.

Anthropomorphizing his paintings, Rothko says, “These pictures deserve compassion. They cry out for it.” His works of vibrating, juxtaposed rectangles are “energetic blocks of color and emotion.” If he sends them out into the world, he worries that they will get “hurt” or “lonely.”

Robert May is superb as the bombastic, temperamental and tempestuous Rothko. For him, priming a canvas is not just a religious experience; it’s a sexual one. After the completion of one such activity, he is panting, overcome, and reaches immediately for a cigarette. Lovely, multi-layered work.

Luke Monday is pitch-perfect as the assistant, whose few lines belie the difficulty and importance of the role. Intimidated and overwhelmed at first, as he rises in confidence, honesty and outspokenness, Rothko is forced to listen, and even retreat. The mounting tension culminates in a surprising crescendo.

The play, like a Rothko painting, can be appreciated on many levels. It’s intellectual and informative, but also impassioned and inspiring. It will force you to contemplate your feelings about art and Rothko and aging and passion – and red.

The Oceanside Theatre Company and their director and actors have created their own little masterwork.