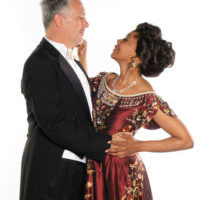 Every permutation is on ostentatious display in Stephen Sondheim and Hugh Wheeler’s lusciously bittersweet 1973 chamber musical, “A Little Night Music.”

Inspired by Ingmar Bergman’s 1955 film, “Tales of a Summer Night,” the show highlights the mutability of marriage and interconnection, a web of jealousy and infidelity, lust and longing, in early 20th century idle rich and their libidinous underlings.

The stodgy, middle-aged lawyer, Fredrik, who espoused 18 year-old Anne nearly a year ago, has yet to consummate the marriage. Meanwhile, Fredrik’s morose, 20 year-old son, Henrik, pines for his new stepmother.

Fredrik’s former lover is the free-spirited actress Desirée, who has a whip-smart young daughter, currently being raised by her world-weary grandmother.

Desirée is having an affair with a pompous, bombastic dragoon, who has a desperately unhappy and deeply cynical wife.

They all come together for one highly-charged “Weekend in the Country,” where liaisons are arranged, secrets are revealed, and all get what they want or deserve in the end.

In Cygnet Theatre’s marvelous production, the comedy is emphasized, as is the fact that almost the entire score is composed in ¾ time. So there’s a whole lot of waltzing, with changing partners among the principals, and support from the well-dressed quintet that weaves in and out of the action, providing musical commentary and foreshadowing.

Exactly ten years ago this month,, when Cygnet moved into the Old Town Theatre, this was the opening show. Artistic director Sean Murray once again directs and plays Fredrik, this time, with the magnificent Karole Foreman as his foil, and a terrific ensemble featuring standouts Sandy Campbell and Megan Carmitchel.

Though the set is spare, the costumes and hats are sumptuous and the singing is excellent, as is the 6-piece offstage orchestra, under the lively baton of Terry O’Donnell.

Consider it a treat for all your senses and sensibilities.