“PICASSO AT THE LAPIN AGILE” at The Old Globe 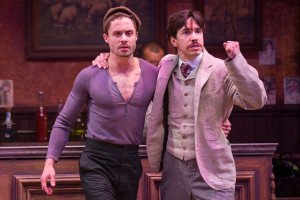 What is the mark of a true genius? Originality. Creativity. Natural ability. And the perfect medium for expressing those unique qualities.

The name Einstein has come to be synonymous with Genius. But in the artistic realm, no one would deny Picasso that moniker.

Now, Schmendiman – well, he’s another story. And then, there’s that hip-swiveling Visitor from the future.

Steven Martin imagined a meeting of these minds – a fictional encounter in a real place: the Lapin Agile in Montmartre.

It’s a brilliant conception, and the 1993 comedy of ideas, currently getting a superb revival at The Old Globe, despite its occasional descent into corn, is smart and thought-provoking and utterly delightful.

The two geniuses, alas, never met, though Picasso, along with many other artists, did in fact frequent the Lapin Agile.

In 1904, the two men were in their mid-20s, on the brink of their brilliant breakthroughs – Einstein’s Special Theory of Relativity and Picasso’s Afro-Cubist “Les Demoiselles d’Avignon.” The world would never be the same.

Steve Martin is a major art collector (his snarky novel, “An Object of Beauty,” skewers the current art scene). He owns Picassos. He knows what the prolific artist and self-promoter had to say. But he’s pretty darned convincing when he puts words into Einstein’s mouth, too (working, in both cases, from actual quotes).

The bar owner, Freddy (endearing Donald Faison) and his girlfriend Germaine (Luna Vélez) an artist’s model, were real people. Schmendiman (Marcel Spears) was not, but he provides wonderful comic relief.  Sagot (jocular Ron Orbach) was a real art dealer. Gaston (funny Hal Linden) could have been a denizen of the Lapin Agile. He’s French through and through, a jaded skeptic obsessed with sex, but given his advancing age and prostate problems, he isn’t getting much.

Martin has Picasso and Einstein challenge each other about their relative talent and earth-shattering potential (this scene is amusingly staged as a duel — of bravado and brain). But they ultimately come to see their parallel thinking, and how their creations will operate in tandem in the near future.

Schmendiman, the inventor who thinks he’s a genius, is thrown into the mix as a symbol of mediocrity and commercialism.

And then there’s that blue suede-shoe-wearing Visitor (in a terrific turn by the cast’s only local, Old Globe/USD MFA student Kevin Hafso-Koppman), who has a major impact on the world, without the benefit of any intellectual prowess or philosophical gift. Does he count in the conversation about real genius? Wasn’t he more about fame trumping virtuosity in an earlier version of the play? Now, he seems to add the gift of music to the discussion. But how is that different from art?

Martin has definitely tweaked his play for this production. It feels tighter, less silly, more contemporary (hence, more anachronistic at times). And perhaps most of all, less jagged.

Director Barry Edelstein (artistic director of The Globe) keeps the pace lively and adds a charming musical coda at the end, which takes advantage of the prodigious musical talent of some of the cast (Hal Linden, for example, started out as a classically trained clarinetist, and Kevin Hafso-Koppman plays a mean guitar).

The ensemble is excellent overall, with strong comic performances from stage veterans Linden and Orbach, and superb characterizations of the charismatic, egotistical womanizer, Picasso (Philippe Bowgen) and the confidently erudite Einstein (Justin Long). Small quibbles: Germaine could be more lusty and worldly-wise; and the three groupies (all played by Liza Lapira) could be more sharply drawn and differentiated. Her Suzanne is the best of the three.

But taken as a whole, the play and production are delectable.

Besides being amused and entertained, you just might learn a few things about art and physics and the creative process. And the difference between genius and marketing.