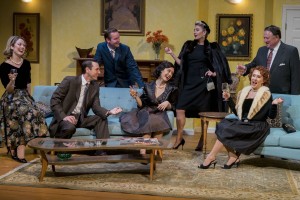 Some people hark back to the 1950s as a simpler time – of “golly-gee” and pearls, white gloves and Jello. Everything neat and tidy and well-defined. Except, a good deal was roiling beneath the ultra-polite, unruffled surface. The air was thick with paranoia. Racism was endemic, Red-baiting became a national pastime. And then there was the Lavender Scare.

The State Department, charged with ferreting out Communists, expanded its suspicions to anyone within its ranks who might be a “security risk,” which is to say, by unsavory behavior, subject to potential blackmail. That included drunks, prostitutes – and homosexuals.

This is the setting for Topher Payne’s 2013 comedy-with-an-edge, “Perfect Arrangement.” Bob (John DeCarlo) has a high-level position on the State Department’s Personnel Security Board. He’s already developed successful ways of identifying unwelcome targets. His next-door neighbor, Norma (Jennifer Paredes) is his secretary.

So, two couples (Laura Bohlin is his wife; Joshua Jones is Norma’s husband), side by side, best buds. Except, they’re not.

It’s a cover. They’re all beards. The two women are in a love relationship; so are the men. Symbolically, they come and go between the spotless mid-century apartments (set design by Sean Yael-Cox) through a closet. So, yes, they all go into and come out of the closet repeatedly. Cue the laugh-track.

An overlong first act establishes the sitcom setup, complete with advertising product placement. Then, as might be expected, the whole thing comes crashing down.

It’s a tricky structure to manage and master, and Intrepid Theatre producing artistic director Christy Yael-Cox and her game cast only fitfully succeed. There are sharp tonal shifts; the play-acting is overblown when the boss (Tom Stephenson) or his wife (Cynthia Gerber) are present. The pitch should change dramatically when the couples are alone. But it really doesn’t. The gay pairs have no credibility as love relationships: perfunctory kisses with practically no physicality.

The stylized nature of the play-acting never seems to leave them. They just don’t read as real people behind the façade.

Stephenson is totally believable, but his naturalistic style seems to come from another play. Only the marvelous Cynthia Gerber (as the ditsy, shallow society-matron) and Brooke McCormick as the dangerous Femme Fatale – -dark-clad in Jeanne Reith’s striking costumes) have the right tone and sensibility. The others seem to be … acting. They’re trying, they’re working hard. And it shows.

All this stylistic inconsistency onstage tends to cloud the play and its intentions. In 2014, the American Theatre Critics Association awarded the comedy the M. Elizabeth Osborn Prize for Best Play by An Emerging Playwright.

Payne certainly has a lot to say – about the ‘50s, the early stirrings of the gay rights movement, and our own perilous times where, like the fragile onstage creation, our constructed reality could fall to pieces.

The second-act revelations fly by too fast. The quippy, breakneck pace allows little time for the audience (or the characters) to process.

This West coast premiere has a month to go in its run, and perhaps, during that time, the actors will ease into their roles and cohere more as a harmonious ensemble. Now more than ever, we need this message of unity, solidarity and strength against the forces that would weaken us, and turn us against one another.