“OUR LADY OF KIBEHO” at Moxie Theatre 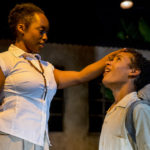 It wasn’t all that long ago that Moxie Theatre staged a play about young girls who have visions, and go into trances, and get accused of being witches. That drama, presented 18 months ago, was “Discourse on the Wonders of the Invisible World,” which takes place ten years after the Salem witch trials in the 1700s.

Now comes the West coast premiere of “Our Lady of Kibeho,” set in the 1980s, at a Catholic school in Rwanda, where three adolescent girls are nicknamed ‘The Trinity’ after they start seeing the Virgin Mary. They have received a message for the country’s president, and one for the Pope. Their revelations start with emanations of peace and love, but devolve into dire warnings of extreme bloodshed and a monstrous war, unless the people “purge hatred from their hearts.”

Ten years later, in 1994, the Rwandan genocide, aimed at the ethnic Tutsi minority, brutally extinguished the lives of more than 800,000 people in just 100 days.

The story is based in fact, and it’s spellbinding, as tales of visions and miracles tend to be. But how the story is told is equally important.

Playwright Katori Hall likes to explore the dark and tragic moments of history. Her last play to appear in San Diego, “To the Mountaintop,” at the San Diego Rep, focused on the last night of the life of Martin Luther King, Jr. That drama, like this one, which premiered Off Broadway in 2014, is flawed in the telling.

You can’t fault the production. Director Jennifer Eve Thorn, the Moxie co-founder who’s making a cottage industry of visionary girls, has amassed a large and talented cast. The three women who play The Trinity – Cashae Monya, Tyrah Hunter and Mallory Johnson — are remarkable. The design is effective, especially when the miracles occur.

But despite its moving and unpredictable moments, the play has many dry and repetitive spots. Thank goodness for the girls’ states of rapture; those episodes of glazed ecstasy are mesmerizing.