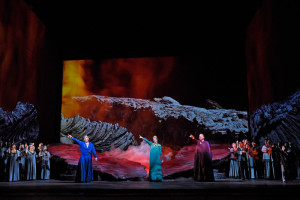 There’s some serious talent and brain-trust behind the new opera, “Great Scott,” co-commissioned by the Dallas Opera (where it debuted last October) and the San Diego Opera, where it’s currently having its West coast premiere.

The composer is Jake Heggie (“Moby-Dick,” “Dead Man Walking”) and the librettist/playwright is Terrence McNally (“Dead Man Walking,” the Tony Award-winning opera-themed play “Master Class,” the book to “Ragtime” and “The Full Monty,” and many others). The director is Jack O’Brien (three-time Tony-winning master of musicals, comedies, dramas, Shakespeare and operas), who served as artistic director of The Old Globe 1981-2007); and the designer is the multi-award-winner Bob Crowley.

What they’ve created together is an ebullient comic opera. Structurally and thematically, it’s an opera-within-an-opera about opera. Parts of a long-lost, never-produced 19th century bel canto opera are presented. Much of the action takes place behind the scenes during rehearsal, which gives the work an uncharacteristically casual and contemporary feel. And there are, of course, tons of opera in-jokes and jabs, and plenty of clever insider repartee (well, recitative, to be precise).

The story concerns international mezzo prima donna Arden Scott, who returns to her Texas hometown to give a boost to the struggling opera company that launched her career. To help save the organization, she offers herself and the opera she unearthed.

Also in the wings: there’s a diva-in-waiting who wants to steal her roles and her career (think “All About Eve,” in arias and a Slavic accent). There’s the woman who trained her, now the President of the Opera board (whose husband owns the local football team and at her urging, is a major donor to the company); there’s the old boyfriend who, like Arden, is now divorced – and wants to reconnect. There’s a budding backstage gay romance afoot. And the ghost of the 19th century composer appears to give Arden career and life/love/passion advice.

Oh, and let’s not forget the Super Bowl, a home game the local Grizzlies are hosting – on the same night as the opera premiere.

No wonder it’s over 3 hours long! (and that’s after about a 20-minute cut since its premiere seven months ago).

The new opera has a lot to say, but it just has too much on its mind. The football sub-theme should be the first to go (even though Crowley’s set for it looks great). The coloratura “Star-Mangled Banner” rendition isn’t enough of a payoff, and the tug-of-war for public support (the most interesting part of the arts vs. sports debate) doesn’t even come up.

Those eliminations (plus the ghost; a soliloquy would work just as well) would give the piece more room to breathe, so we actually have a chance to think about the relevance of classic operas and the need for new works that reflect the music and thinking of their time; and we can consider the balance between life and career, and the sacrifices made by artists for their art; and we can mull the pricelessness (and invisibility) of the hard-working, hand-holding stage manager; and we can take a moment to laugh at the opera stereotypes before the next conflict comes along.

Four of the current leads are new to the opera; four were with the original production, including superstar mezzo Frederica von Stade (game and supple, given a small role and insufficiently multifaceted character), Nathan Gunn (ditto, who’s there to serve as Arden’s love interest – an architect formerly unwilling to accept the globe-trotting, peripatetic opera singer’s life. It’s not clear he’s ready now, either). And the magnificent countertenor Anthony Roth Costanzo who, playing a major, antic part as the aforementioned invaluable stage manager, moves, acts and sings with perfection. And, as the hottie baritone (who’s never sure if the audience is applauding for his voice or his bod), the highly engaging Michael Mayes.

The new cast, like the old, is exceptional. Playing Arden, with ardor, is Kate Aldrich, who has a glorious voice and an impressive range, which she gets to show off in her highly ornamented, virtuosic turn as the title character in the fictional opera, “Rosa Dolorosa.” Superb soprano Joyce El-Khoury is insistent and amusing as Arden’s challenger, Tatyana.

As the bari-tenor comedy team (the hunky and the chunky?), Michael Mayes and Garrett Sorenson make a hilarious pair; they shine both vocally and dramatically. As the Maestro and the Ghost, Philip Skinner offers a rich bass-baritone. So the quartets, quintets and septets sound terrific, and the chorus (under Charles F. Prestinari) provides excellent support.

O’Brien skillfully keeps everyone moving or positioned organically and realistically (except in the classic opera scenes, which are aptly overblown, and include Crowley’s trembling, exploding Vesuvius); he brings everyone’s acting acumen to the fore.

Heggie obviously had a grand time toggling between modern and classical genres, and the Symphony, under the baton of Joseph Mechavich, is persuasively along for the ride. The Italianate segments are beautifully lyrical; in the contemporary sections, recitative tends to dominate, and the melodies may not always match the colloquial (or profane) nature of the conversation (“This shit is hard,” intones Arden early in the rehearsal period).

But the arias are wonderful, and the comic set pieces are delightful – especially the playfully cutthroat one in which each performer participates in a wily alphabet game of inventing a verb-role-location sequence for each successive letter, explaining why they can’t possibly make a dinner date (“I’ll be mauling Mimi in Miami” and “I’ll be zipping through Zelmira in Zanzibar”). Very cute; McNally at his wittiest.

So, overall, a charming and whimsical new piece, with some earnest undertones, and a good deal to say about the state of contemporary opera. This production is marvelously sung and beautifully designed. Some more nips and tuck should serve it – and the audience – well.