“ON YOUR FEET” at Moonlight Stage Productions 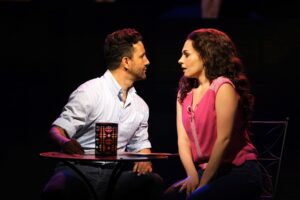 “Washing cleans the clothes,” Gloria Estefan’s mother tells her young daughter as they do the laundry. “Music cleans the soul.”

Both were named Gloria. Both were singers with big dreams. Gloria got to live out her mother’s fantasies Big Time, becoming the first major Latin crossover artist and selling 100 million records worldwide, thereby making the list of the Top 100 Best-Selling Musical Artists in America

It wasn’t an easy trip. Gloria wasn’t interested in the spotlight at first; she just wrote songs. But once she met Emilio Estefan in 1977, at age 19, and joined his band, and married him the next year, everything changed in every way. He became her number one supporter, producer and promoter.

In fact, the 2015 musical that tells their story, “On Your Feet,” gives us more of the feelings and motivations of Emilio than of Gloria. That’s one of its weaknesses.

But this is a story of family: there’s a bit about Gloria’s parents escaping to Miami from Cuba, her help in caregiving after her father is diagnosed with multiple sclerosis, her strong relationship with her abuela (wonderfully droll Catalina Maynard) and her rocky on again/off again relationship with her mother (Crissy Guerrero).

But what glues it all together is her marriage to Emilio, still going strong after 43 years.

It was Emilio’s relentless pushing that got them onto the mainstream U.S. airwaves in the ‘80s, and after her tragic, back-breaking tour bus accident of 1990, encouraged her comeback performance at the American Music Awards of 1991.

The show jumps back and forth in time (book by Alexander Dinelaris), and doesn’t tell the fascinating story with the kind of emotional probing and depth of character and it deserves.

This one’s all about the music.

Every one of the 26 songs in the musical was produced and recorded by Emilio, Gloria and the Miami Sound Machine (Emilio’s band, the Miami Latin Boys, formed in 1975, was re-named after Gloria joined two years later).

There may be a few too many ballads (though some, like “If I Never Got to Tell You,” are potent), and despite the pair’s prolific output, too many songs in general. This left too many great ones for a Best Of encore that included “Everlasting Love” and “Turn the Beat Around,” which should have gotten their own featured moments.

“Conga,” for which Gloria is probably best known, definitely gets its due: it closes the first act, opens the second and features in the finale.

The energy is high at Moonlight Stage Productions throughout, the dancing and singing are superb (direction by James Vásquez, choreography by Carlos Mendoza, music direction by Lyndon Pugeda) and the cast is excellent.

Lithe, handsome Eduardo Enrikez, who suavely plays Emilio with a heightened Ricky Ricardo Cuban accent (Gloria teases him for his mispronunciations all the time), is a stage vet who was in the original West End production of the musical. He has excellent chemistry with Ariella Kvashny, a power-voiced newcomer who attended the San Diego School of Creative and Performing Arts and only recently graduated from UC Irvine.

Diego Mendoza, who attends Rancho del Rey Middle School, is effective as their son, Nayib, and also as star-dancer Jeremy (though why on earth does a Bar Mitzvah boy break a glass?? That’s for weddings only!).

The aptly percussion-heavy 10-piece orchestra sounds terrific (under Pugeda’s baton), and the sets and costumes, based on the original Broadway designs, are enhanced by the ever-changing projection design of Blake McCarty. Jean-Yves Tessier’s lighting design is also a plus.

With all its hip-swiveling and salsa, this show all but guarantees that the “Rhythm is Gonna Get You.”