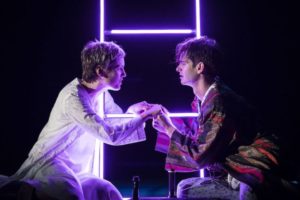 It was a knockout and a blockbuster when it opened in 1990. A jaw-dropping, theatrical game-changer. Tony Kushner’s “Angels in America” knocked everyone’s socks off, and garnered every honor imaginable, including the Pulitzer Prize for Drama and the Tony Award for Best Play.
Set in the 1980s, at the peak of the AIDS crisis, the play, which is presented in two parts, considers the complexities of the sociopolitical climate of that tense, fraught time. The writing is brilliant: both dense and funny, poetic, historical, metaphorical and angry. The characters range from the sarcastically funny to the mentally unstable to the deeply confused. An angel makes a dramatic appearance in Part I, “Millennium Approaches.”
In Part II, “Perestroika,” heaven has been abandoned by God, and one gay New Yorker is chosen as the messenger, who will help set things right.
The Broadway production of both parts premiered in 1993. Ten years later, HBO created a stunning miniseries, directed by Mike Nichols, with an all-star cast featuring Meryl Streep and Al Pacino.
Now along comes England’s National Theatre, with its inventive 2017 take on the complex masterwork, which seems eerily relevant right now. It’s directed by multi-award-winner Marianne Elliot, who helmed the wildly imaginative productions of “War Horse” and “The Curious Incident of the Dog in the Nighttime.”
Ever since 2009, the National Theatre has filmed its best and most popular productions, and sent them out to movie theaters in 60 countries around the world. We’re lucky that several San Diego theaters carry these magnificent, artfully filmed shows.
So far, I’ve only seen Part I, a powerful piece starring Andrew Garfield and Nathan Lane. The performances are strong, though I still favor the HBO production. But I’ll reserve final judgment till I see Part II. The film only shows in certain theaters and on certain days. Check out ntlive.com and sign up to get their schedule and updates.
If you’re a theaterlover, this is an unparalleled experience you absolutely cannot miss.