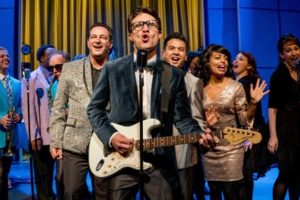 Some people know exactly what they want, and they won’t let anything or anybody get in their way. Buddy Holly was that kind of guy.

Born in Lubbock, Texas, he was at first shoehorned into Country-Western music. But the shoe didn’t fit.
He exasperated some folks, by pushing his brand of rock and roll, which was infused with blues, gospel and R&B – and insisting on control over what he did and how he did it.

Of course, he proved to be right. But his meteoric career was tragically short; it lasted only from 1952-1959, when he was killed in a small-plane crash, at the age of 22. Also in that ill-fated aircraft were the wildly popular Big Bopper (J.P. Richardson) and Ritchie Valens.

All this, plus the pregnant wife he left behind, feature in “Buddy: The Buddy Holly Story,” currently getting a superb production in a first-ever collaboration between Intrepid Theatre and New Village Arts.

Mostly, it’s about the music, and how Buddy developed his style, interacted with The Crickets (his two friends from high school), and rose to chart-topping fame.

AllMusic defined him as “the single most influential creative force in early rock and roll.” His music was admittedly a major influence on The Beatles (The Crickets inspired their name!), The Rolling Stones, Eric Clapton, Bob Dylan, Elton John and Bruce Springsteen. He was among the first artists inducted into the Rock and Roll Hall of Fame, in 1986. Rolling Stone magazine ranked him number 13 in its list of “100 Greatest Artists.” The Telegraph called him a “pioneer and a revolutionary… a multidimensional talent wrote and performed songs that remain fresh and potent today.”

You can say that again. Songs like “Everyday,” “Peggy Sue,” “Maybe Baby,” “Oh Boy” and “Rave On” still sound fantastic (and fortunately, this production allows the audience to sing along, to “Rave On,” as well as Ritchie Valens’ big hit, “La Bamba”).
“Buddy: The Buddy Holly Story,” created by Alan Janes in 1989 and considered to be the first jukebox musical, ran for 12 years in London’s West End. Like the best of its genre, it tells a real story, which keeps it genuine.

Under the rockin’ direction of Christy Yael Cox, it’s a wild and fun ride. The momentum takes a while to ramp up, but by the time the hits start coming, we’re ready to rock.

The cast is incredibly talented, not only vocally and dramatically, but musically. Almost everyone plays an instrument (long-time local actor Eddie Yaroch was a delightful surprise on sax), and many play a number of them.

Ace music director Tony Houck is killer on keyboards, trumpet and accordion. Noah Zuniga-Williams, who played Buddy expertly in the excellent OnStage Playhouse production of the show last year (and understudies the role this time), is nothing short of amazing on upright bass. He lies down with it, he sits on it, he lets Buddy walk all over it. Incredible. And he also plays tuba, which is his current focus at Cuyamaca College.

There’s some jaw-dropping talent in the Apollo Theatre scene (one of the funniest in the show, since the singers at the legendary Harlem music hall had thought Buddy and the Crickets were black. In 1957, the Critckets were the first white group to play the Apollo). The acts that come on before Buddy feature the fabulous Benjamin Roy, Eboni Muse and Jasmine January, powerhouse singers all.

The rest of the 16-member cast rises beautifully to the occasion, with Manny Fernandes fun as Hipockets Duncan, the DJ who first notices Buddy and super as The Big Bopper; and Shaun Tuazon, terrific as Ritchie Valens. Special shoutout to multi-character musician Zackary Scot Wolfe and actor/choreographer Nadia Guevara.

At the center of it all, playing a taciturn but unequivocally determined and talented Buddy, is Paul Swensen Eddy, an actor/singer/songwriter from Kentucky who recently moved here after six years in New York. This is his memorable, auspicious West coast debut. He sings like crazy, masters the Buddy twang, and plays a mean guitar.

Jeanne Reith has done a fabulous job on the costumes. The sound (Chad Goss) and lighting (Alex Crocker-Lakness) are excellent contributors to the rock sensibility. The scenic design (Christopher Scott Murillo) provides several quickly-transforming locales. Oddly, the stage is flanked by two narrow panels that sometimes serve as backdrops for archival projections that can barely be seen.

In a break from the authenticity of the plot, after the sad end met by the Buddy, Bopper and Ritchie, they reappear for the rousing finale and clapping, stomping singalong that caps a fun, exuberant night at the theater.