“MATILDA THE MUSICAL” at the Civic Theatre 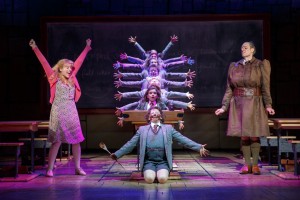 “Sometimes you have to be a little big naughty,” sings the precocious, bookish 5 year old.

At first, Matilda seems too good (and smart) to be true. But she is an inveterate prankster, who acts out against her neglecting, narcissistic parents (bleaching her father’s hair and gluing his hat to his head, for example). Once she realizes that she has telekinetic abilities (she can make a lot happen just by focusing her eyes), she starts to use her superpower against her monstrous school headmistress, Miss Trunchbull, to rather delicious effect, at the same time, liberating her treasured teacher, Miss Honey.

There’s a dark undercurrent to “Roald Dahl’s Matilda, The Musical,” as there in in almost everything written by the beloved novelist, poet and screenwriter (1916-1990), whose 1988 children’s book provided the source material for playwright Dennis Kelly and comedian/musician/composer Tim Minchin, who created the music and lyrics.

Some of Dahl’s works have been sugar-coated for a Disney-fied young audience (“Charlie and the Chocolate Factory,” “Fantastic Mr. Fox”). But the nasty, quirky tone was maintained in the delightful 1996 film, with Danny DeVito directing and, along with his wife, Rhea Pearlman, playing Matilda’s selfish, scheming, fiercely anti-intellectual parental units.

Her folks especially hate books (which Matilda devours voraciously), and far prefer TV (her father’s song, “Telly,” is one of the show’s highlights. Another is the kids-song-on-swings, “When I Grow Up”)

The musical, which won a record seven 2012 Olivier Awards (including Best Musical) in London, where it premiered, also snagged four Tony Awards on Broadway, including Best Book of a Musical, Best Scenic Design and Best Lighting Design.

But the entire undertaking is undermined by the atrocious sound/acoustics in the Civic Theatre. I was seated in the mid-orchestra, and those around me were complaining (as were we) that they couldn’t understand a word of the lyrics. And that’s a pity, because the lines and rhymes are often witty and unpredictable.

There’s so much energy and talent on the stage, and so many lessons about literacy and female empowerment, combating menace and defending what’s right and fair (the last, particularly pertinent these days), that missing any of it is a tragedy and a venue travesty.