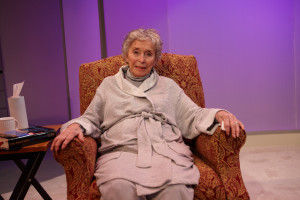 The older you are, and the older your parents  — if they’re still alive – the more disturbing and discomfiting you’re likely to find “Marjorie Prime,” the 2015 Pulitzer Prize finalist currently having its local premiere at North Coast Repertory Theatre.

Artificial Intelligence has made considerable progress. The likelihood of a lifelike, interactive robot seems assured in the not-too-distant future.

In Jordan Harrison’s short, intermissionless play, set around 2060, Marjorie is 85 years old and fading. She’s losing her physical capabilities and her memories. So her son-in-law and her rather reluctant, technophobic daughter, get her a companion, a Prime, that is, a robotic avatar, of her late husband, Walter. Marjorie chose him to appear at a young, virile age, before the tragedy of their life occurred.

Marjorie converses and reminisces with him. Her son-in-law, Jon, filled Walter Prime with background and stories. Her daughter, Tess, is skeptical, though Walter Prime helps fill the hours with her mother, and unlike Tess, never becomes impatient or resentful.

It’s an intriguing idea, but a little creepy, too. It’s nice to think that these robotic housemates would help with dementia or depression. But they are unnerving.

Dee Maaske is wonderfully credible and feisty as Marjorie. Steve Froelich is stiffly robotic as Walter Prime, but he seems to grow more human as he learns more about Marjorie – even if not everything Jon has told him is precisely factual. Elaine Rivkin and Gregory North are excellent as Tess and Jon.

This drama isn’t just about the future. It’s very contemporary in how it deals with aging, family relations, how we preserve memory and face death. It certainly sets you thinking.

You might now be in the prime of life; but if you lost a loved one, would you want a Prime in your life?