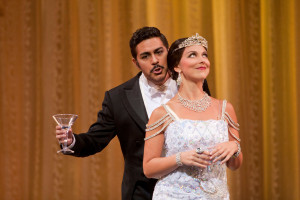 Poor Violetta. After the glam-life of a famous courtesan in the Parisian demimonde, she finally finds true love. But it’s ripped away from her, leaving a trail of regret and remorse behind.

The ill-fated heroine has made seven previous visits to San Diego, in the beloved Verdi classic, “La Traviata” (‘the fallen woman’). This time, she’s been transported to a different timeframe: the Roaring ‘20s, an era that offers wonderful opportunities for glamorous Art Deco settings and glittery flapper costumes.

Marta Domingo conceived this re-creation for the Los Angeles and Washington National Operas, and she directs the San Diego Opera production.

Verdi wrote his three-act opera in 1853, based on the play, “La Dame aux Camélias,” which was in turn adapted from the novel by Alexandre Dumas fils. The storyline, rooted in reality, reflects a relationship Dumas had with a Parisian courtesan whom he ultimately abandoned because he could not afford the care for her illness.

In the opera, Violetta, who has been supported by wealthy, aristocratic patrons accustomed to lavish parties and extensive gambling, falls hard for Alfredo, a young man without the wealth to maintain the lifestyle she has enjoyed. But their love is real and intense, and she willingly retreats with him to a country house, where they live in bliss for several months (except for the fact that Violetta is selling off all her belongings to support them).

One day, when Alfredo is not at home, his father appears, to beg Violetta to abandon his son, preserve the family reputation and allow his affianced daughter to be wed unblemished by scandal.

Violetta reluctantly agrees. Heartbroken and bereft, she flees their idyll and returns to Paris and her former life; her consumption (tuberculosis) gets worse (though we never once hear her cough). At a grand party, Alfredo insults and humiliates her in public, and is chastised by his father.

Violetta is deathly ill, at the very end of her life, when Alfredo is reunited with her. He was devastated by her abandonment, and his father, shamed and repentant, has finally told him the truth. Alfredo, too, is remorseful. Violetta remains optimistic and open-hearted, and dies in his arms. Redemption comes to all.

The very first violin notes signal a bittersweet story to come, and this production is certainly is a beautiful one. Director Domingo, also responsible for the stunning scenic and costume designs, certainly knows how to create memorable, sometimes heart-stopping stage pictures.

During the overture, a huge lamppost sits center stage, where prostitutes of the lower echelon lean and are snatched up by wealthy men. Then, in stark contrast to the seedy street scene, a black Deco proscenium arch drops down and the scene shifts to Violetta’s elaborate bedroom, with its large, semicircular, black-and-white bed.

Maintaining the black and white theme, the action continues at a big, boozy party (gorgeously attired), topped by a massive chandelier. Painterly trees convey the rustic country house in the fall, with leaves drifting down. But it’s the final scene, back in the bedroom, with a trailing black-and-white bedspread and snow falling against a starry sky, that grabs the romantic heart.

The only questionable directorial touches are in the Act 3 party, where entertainment is supposedly provided by “gypsy girls” and “Spanish matadors.” These dancers (choreographed by Kitty McNamee) look like extras from an Esther Williams extravaganza, dolled up in glittery bikinis. And the bare-chested ‘matador’ (exquisite, leaping Louis Williams) seems to be imported from an African dance troupe.

So much for the theatrical elements. The main attraction, of course, is the singing.

Corinne Winters, who has made Violetta her signature role, gives a marvelous performance. Though she could be more lively and flirtatious at the outset, she sparkles in the darker moments. Her high notes are magnificent (though her very lowest notes are a tad weak), But she is able to project her pianissimos perfectly, even in a recumbent position. Impressive technique, and a smooth, creamy, effortless sound throughout.

She often seems to overpower her Alfredo (tenor Jesús Garcia), whose voice feels more pinched and effortful, and whose acting can seem a bit stiff. But when Winters is paired with velvety-voiced baritone Stephen Powell (as Alfredo’s father, Giorgio Germont), magic ensues, in their duets “Pura siccome un angelo” (‘Pure as an angel’) and “Dite alla giovine” (‘Tell the young girl’).

The Opera Chorus is in splendid form (chorus master Bruce Stasyna) and the San Diego Symphony, under the baton of David Agler, masters all the subtlety and nuance of the lush score.

This marks an auspicious ending to the Opera’s 52nd season. The company has officially embarked on a new journey, with grand operas reconceived, and smaller-scale work offered in more intimate settings than the cavernous, 3000-seat Civic Theatre. Here’s hoping this new path proves financially fruitful – and attracts a new and younger audience, as well as loyal opera aficionados.