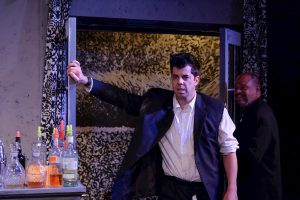 It was one of those balmy nights in San Diego. I found myself huddled in a dark room. Twenty feet away from me, people were dropping dead, one after another: gunshot, poison, excessive numbers of bizarre alcoholic beverages. It was enough to make a jaded critic sit up and take notice.

A well-appointed black and white room. Eight black-and-white-clad characters. Characters with a capital K. I tried like crazy to figure out who the heck dunnit. Who on God’s green earth forced so many laughs from my jaundiced lips?

It was Sam Bobrick, playwright of “Flemming (An American Thriller).” This film noir spoof is a wildly colorful hoot. A nonstop barrage of hilarious deadpan lines that take aim at cops, psychiatrists, wealth, marriage, family and more.

We’re in a tony house in upscale Westport, Connecticut. Modern day. All the amenities. But Henry Flemming, an investment banker with a great life, a lovely wife. and two kids he never sees, feels trapped and unhappy. So he sells his business, buys a practice, inherits a secretary and becomes a detective. And with his first case, the bodies start piling up.

The play has more twists than Chubby Checker. Don’t bother trying to solve the mystery. Embrace the lunacy and let it fly. It all gets sorted out in the end, complexly but satisfyingly.

At Scripps Ranch Theatre, director Robert May and his crackerjack team of designers have created stunning sets, costumes and lighting.

Cris O’Bryon is the milquetoast Flemming, who gets his Peter Gunn on, turning his midlife moment into a crisis for the unfortunate victims, but a grand step forward on his way to contentment and manning up.

O’Bryon is funny, as are Matt Thompson, Kristin Woodburn and Walter Murray. But in thrillers, farces and parodies, a crackling pace is paramount. Here, line flubs and an often sluggish tempo work against a romp that should clock in at a brisk 90 minutes, without the intrusive intermission.

Still, you’re sure to get some hearty chuckles and snorts out of this smart, crafty sendup.