“HOPE” at Talent to aMuse Theatre 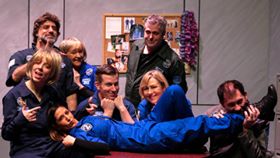 “Hope” is a triple whammy: mystery/thriller, sci-fi fantasy and space odyssey. Each genre is a dramatic challenge in its own right; combining the three onstage, without massive special effects, is a theatrical Everest.

And he’s scaled the peak with aplomb. He’s created quite a good deal of suspense, as the Interstellar Space Freighter, Adh Mór Ort, transporting 14,000 colonists, hurtles toward the planet Tellus, which is orbiting the star Epsilon Erandi.

All’s going well 14 months into a 16-month trip until an “anomaly” appears, and tension mounts as the possibility that it may be a derelict craft become reality, bringing with it the potential for tons of money for each of the six-person crew, as a reward for the salvage.

Once those on the “tug” reach the anomaly, it turns out to be the Earth Federation’s experimental interstellar spacecraft, Hope, which was designed to go to the center of the galaxy, and was due to return a year ago. The crew begins to make some creepy discoveries, and when they return to the Ort, strange and sinister things start happening there, too.

In one potent scene, although there are actors onstage, they’re not speaking. For an extended period, they (and we) are reacting to the voice transmission of the crew-members on the tug. We’re all learning about the events on Hope at the same time, and there are some nail-biting moments.

With all the credible, not-too-distant futuristic detail that Hadlock painstakingly includes, and after 2½ hours, the ending is disappointing. Though some issues and acts are fully explicated, others are left frustratingly unresolved (about those weird tumors that popped up on the Hope crew, for instance…)

As a designer, Hadlock has done a stellar job (no pun intended), with a bi-level, slick gray spaceship interior, spreading across the Tenth Avenue Arts Center mainstage and featuring four playing spaces: a common room, a master control area, a sick bay and one crew-member’s cabin up above. Very compelling.

As a director, Hadlock knows how to raise the stakes and heighten the thrill and fear factor. His cast, though generally capable, is somewhat variable in its skill level and amount of articulatory agility/ability to project (especially in the first scene, where actors raced through their lines, just when we’re grasping for exposition). But their reactions and interactions are credible.

There are two love stories on board (though we never find out why the attractive and efficient doctor, Mona, who inexplicably speaks of herself in the third person, can never love anyone, as she repeatedly asserts).

There’s some interesting stage business, and the fights and murders are handled expertly. The costumes (Ryan Dietrich), sound (Steve Murdock, who also appears in the piece) and lighting (Michael Barahura, with Hadlock providing projections) provide excellent ambience – but why was the cast left in near-darkness for the curtain call?

As the Irish-accented captain, Patrick McBride, who doesn’t appear on San Diego stages nearly enough, gives a forceful and persuasive performance. Carla Navarro is strong as Mona, as is Murdock as her paramour, Gabe. Brendan MacNeil, James Steinberg, Devi Noel and Colette Culbertson are fine as other crew members. And Sandy Hotchkiss is downright spooky as the paranoid, traumatized Clarice.

For a world premiere, this gutsy show is in impressively good shape. It needs some trimming, tweaking and elucidating, but Bravo to Hadlock and the producing company Talent to aMuse, for bringing this fiction to fruition. Fear and greed meet hope in outer space: intriguing, no?