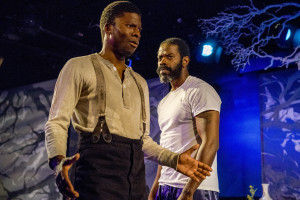 Lewis is having a bad night. He’s got a wicked case of insomnia, his wife of 25 years just walked out on him, and the ghosts of his ancestors keep appearing to remind and berate him.

In “Blue Door,” by Tanya Barfield, Lewis admits that he resists looking at himself. He tends to compartmentalize. And intellectualize. An erudite African American mathematics professor married to a white woman, he’s cut himself off from his personal and cultural history.

“I divide myself from myself,” he admits. The parts are about to start coming together in this intense, occasionally amusing, 85-minute reckoning.

First to show up in his bedroom is Lewis’ great-grandfather, Simon, a slave who says he’s “just passin’ down stories.” And so he does, along with Lewis’ grandfather, Jesse. Lewis’ long-estranged, late father puts in a violent appearance. Most confrontational is Rex, Lewis’ brother who died of an overdose, and snarls: “You’re turning your back on everything that made you black… You’re afraid to be black.”

The catalogue of family horrors is a recounting of African American history –beating, burning, lynching, imprisonment, sexual and physical abuse. His whole life, Lewis has fought against the oppression and failure of his past, obsessing on success and achievement. Now the legacy ends; he has no descendants. There’s no one left to tell the stories to.

Especially about a blue door which, his great grandma used to say, “keeps the bad spirits out and the soul-family in.”

In this era of brutality against African American men, in this month commemorating African American history, Moxie is on the cutting edge. Artistic director Delicia Turner Sonnenberg has brought us an important story about the effects of history and heritage – or trying to escape them.

Her production is outstanding and her cast is superb; Vimel Sephus brings gravitas, a resonant voice and a haunted, wild-eyed look to Lewis’ existential crisis. And Cortez L. Johnson, playing everyone else, expertly carves out memorable, dimensional characters.

The set is a metaphorical jumble of branches and tangled roots. This powerful piece resonates deeply and, like your own past, should not be ignored.