“HOOKMAN” at SDSU in association with Moxie Theatre 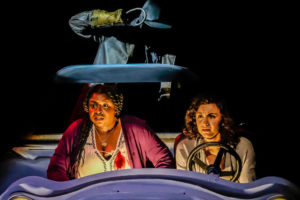 Urban legends have a way of staying in your head and getting under your skin. Especially the scary ones, like that guy with a hook for a hand who goes around killing young women.

The mother of 17 year-old Lexi, a college freshman 3000 miles from her California home, has been warning her about The Hookman for years.

Now, Lexi sees him everywhere. He’s lurking in her car, in her dorm-room, butchering victims and leaving blood in his wake. Or is he just a figment of her active, lonely, self-deluding imagination? Or a metaphor for her guilt and denial about the recent death of a friend?

“Hookman” is the slasher satire by acclaimed playwright Lauren Yee, which premiered in 2015 when she was still a grad student at UCSD.

The title character is the predatory male amid an array of distracted, self-obsessed coeds, lacking in empathy, listening ability and communication skills, except with their phones.

All the stereotypes and tropes are here – the self-deceptive prevaricator; the dilettante activist; the social media addict; the spiteful, rule-following high schooler; the stoner resident advisor –  all exaggerated and subverted. Reading about other productions made me feel that this odd and disturbing early one-act by a gifted writer should be much more darkly funny than it is at San Diego State University.

But in this production, in association with Moxie Theatre, helmed by its artistic director Jennifer Eve Thorn, the performances are spot-on and a little frightening in their credibility. Lee has a remarkable talent for dialogue, and these undergrads deliver the goods. It’s the tone that needs tweaking.

I, for one, wasn’t as put off by the masked man with the hook or the repeated appearance of blood or the existential plight of young women these days, as much as by the cavalier lack of compassion, morality and responsibility on display, which literally took my breath away.