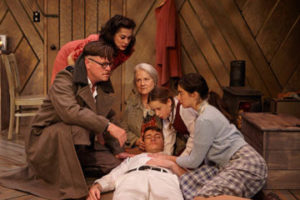 During World War II, there was one part of England that was occupied by the Germans – the Channel Islands.

On the island of Guernsey, in 1943, a young man washes up on the beach, naked. He’s rescued by a young woman and brought back to a shed-like retreat where four females are trying to hold on, having lost their men – and their familial home, which has been commandeered by Nazi officers.

Jeanne, the head of this household, considers herself a pragmatist. Some might call her a collaborator. She uses her wiles and attractive charm to cozy up to the German officers in order to win favors and protect her brood: her precocious 10 year-old daughter, Estelle; her daughter-in-law, Lily; and her long-time housekeeper, Mrs. Lake.

The officer with whom Jeanne was having an affair has been sent away. The new man, Major von Pfunz, would love to take his predecessor’s place – in all ways.

Little Estelle hates the “Krauts,” and will do anything to sabotage them. Her approach is what might be called ‘dirty tricks,’ pranks intended to drive them a little crazy. She wishes death on them all, but especially von Pfunz, who displays a charm of his own, though something far more sinister seethes beneath the surface.

Lily is fearful, and she has a lot to be afraid of. She’s a Jewish Cockney, not a local, both hiding and trapped – on the island and in the household — without a legal ID, and with a mother-in-law who is less than loving toward her.  Lily bravely resuces the stranded, unconscious man, and she’s devoted to bringing him back to health.

The handsome stranger has completely lost his memory. He has no idea who he is or where he’s from. Estelle names him Gabriel, who was an angel in the Old Testament, a messenger of God. In the Kur’an, Gabriel was the ‘angel of truth.’

Truth (and the subversion of it) features prominently in English playwright Moira Buffini’s  intriguing drama, “Gabriel,” which had its London premiere in 1997, and opened Off Broadway in 2010.

North Coast Repertory Theatre has snagged the West coast debut of this taut tale of romance and suspense, deception and honesty, mystery and brutality, cowardice and courage, kindness and cruelty.

It’s an intense, layered and provocative piece, excellently directed by Christopher Williams and masterfully acted by an outstanding ensemble of six.

Jessica John gives a marvelous performance as Jeanne, who’s emotionally torn, using all her feminine wiles to lie her way through a grim, diminished existence, in order to shelter her family. She’s the great compromiser, but she may go too far.

Annabella Price’s Lake seems rigid, but can also be caring. She’s the most afraid of stepping out of line in any way, and won’t exert herself to save anyone, but she does her part by dealing in the black market to keep food on their plates. And she’s not above collecting gossip from the neighbor-ladies, which is only sometimes accurate and/or helpful.

Estelle is a deliciously impish character, unequivocal and outspoken in her likes and dislikes. Talented 11-year-old Catalina Zelles plays her with puckish glee, a credible English accent, and whip-smart insight.

Lilli Passero’s Lily is warm and compassionate, but near her wits’ end before she discovers the young man. She’s grateful to find a friend (and more) in Gabriel (appealing Alan Littlehales, who seems genuinely confused by his identity and background). He’s an enigmatic character (devil or angel?), but perhaps the bigger puzzle of the piece is the slowly unraveling interior of the self-proclaimed poet, von Pfunz.

Richard Baird is magnificent as the SS officer, somewhat captivating at first, trying to show his humanity (and intentions) to Jeanne. But he becomes increasingly menacing and terrifying as the story unfolds.

Both playwright and director ratchet up the suspense. Some questions are never resolved. With all the flying references, and Estelle’s magic incantations, is there something more ethereal, spiritual or symbolic going on here?  That’s for you to decide.