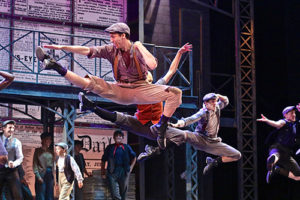 A David/Goliath story is always inspiring. But in these times of appalling income inequality, it’s especially gratifying to revisit a real historical event where the impoverished underdog triumphs over the affluent industrialist.

As an added bonus, the story extols the virtues of two beleaguered American mainstays: journalism and unions.

All this, plus singing, tap, romance, camaraderie and high-flying leaps – what’s not to love?

“Disney’s Newsies,” the 2012 musical that was nominated for eight Tony Awards and won for Best Score and Best Choreography, was based on the 1992 Disney film of the same name. Now, the show is having its local premiere at Moonlight Stage Productions.

The national tour came through in 2016, and this production is every bit as good. The talent is superb. (A live filmed version of the stage production, with cast members from both the Broadway and Tour productions, was digitally released in 2017).

But above all the endearments and accolades, it’s the story that reigns.

In the late 19th and early 20th century, very young boys were essential to newspaper distribution. They hawked newspapers (“papes,” in their jargon), earning, on average, 26 cents a day, which was barely survival. Many were the children of immigrants; many others were orphans.

They were worked mercilessly by the capitalistic, autocratic newspaper magnates Joseph Pulitzer of The New York World (clearly not the benevolent philanthropist he’s remembered as) and William Randolph Hearst of The Evening Journal, whose many foibles and peccadilloes have already been memorialized (in “Citizen Kane” and elsewhere).

Hearst, though mentioned, never makes an appearance in the musical. Pulitzer (Hank Stratton, aptly condescending and unpleasant) represents the demon boss, who in 1899, seeks to improve his bottom line by robbing from the hapless “newsies,” raising the amount they pay for their papers from 50 cents per 100 to 60 cents. That added up to a 20% increase, and it was too much for the newsboys to bear.

Thanks to the quick thinking of Davey Jacobs (excellent Scott Arnold), they decide to unionize. Davey and his 10 year-old brother (magnificently self-possessed, mega-talented 12 year-old local, Noah Baird, who made his professional debut at Moonlight at age 6, and has accrued Broadway and TV credits since) were forced to work because their father was laid off – with no union protections.

As soon as the kids unionize, they decide to strike.

Davey is right-hand man to Jack Kelly (marvelous Dillon Klena, an appealing triple threat, winner of the 2018 National Youth Arts Artist of the Year, and still only an undergrad). He’s the natural leader of the group: unpolished, but gutsy, charismatic and articulate, in his way. He has no trouble storming into Pulitzer’s office to make his demands: revert back to the 50 cent charge and cover the cost of unsold papers.

When Pulitzer refuses (“I’m giving them a real live lesson in economics”), the boys organize a major rally (thousands showed up, in fact), effectively bringing traffic to a standstill on the Brooklyn Bridge, decreasing The World’s circulation from 360,000 to 125,000. Pulitzer was forced to compromise. They also inspired other strikes and more humane child labor laws.

The magnetic character is strongly based on the real-life “Kid Blink,” some of whose words actually make it into the script, wonderfully penned by Tony Award-winner Harvey Fierstein. Academy Award-winner Alan Menken composed the music, with lyrics by Jack Feldman.

The show’s strongest numbers are the rousing anthems “Seize the Day,” “Carrying the Banner” and “King of New York,” as well as the sweet ballad, “Santa Fe,” which expresses Jack’s dream of escape. All are extremely well played, by a 10-piece orchestra (under the baton of musical director Randi Ellen Rudolph) that sounds twice that size.

As the tale progresses, we meet a number of the guys, most notably, Jack’s best buddy, Crutchie (local golden boy Austyn Myers), who has a lame leg (frighteningly believable!) and no family. He also has a winning personality; that and the crutch help him sell lots of papers. But they don’t keep him from getting slammed into The Refuge, a horrific holding pen/prison/orphanage presided over by “Snyder the Spider” (convincingly loathsome Paul Morgavo).

A plucky budding journalist, Katherine Plumber (lovely-voiced Katharine McDonough), offers to take up the newsies’ cause, to show the world what the realities of their lives and demands. Needless to say, there’s an immediate cross-the-tracks attraction between Katherine and Jack.

New York Governor Teddy Roosevelt didn’t show up at the real rally, but he makes an appearance in the show (convincingly played by Greg Nicholas). Another fascinating character is Medda Larkin (Shirley Johnston, entrancing both vocally and dramatically), an actress who owns a theater and harbors the boys when necessary. She also helps uncover and showcase Jack’s artistic talent.

Larry Raben, who has directed a number of Moonlight successes (“Titanic,” “Catch Me if You Can”), does another bangup job with “Newsies.” The pace is lively, the energy is dynamic, and the choreography (Karl Warden) is outstanding. The dancers are high-flying, too.

Presumably (though it’s not specified in the program),the set and costumes are rented. The sound (Jim Zadai) is crisp, and the lighting (Jennifer Edwards) and projections (Jonathan Infante) add dimension.

In a confluence of coincidence, Moonlight’s opening night happened to fall on the 119th anniversary of the real events depicted in the musical.

There’s so much to like – and learn from – in this show. It’s a much-needed injection of hope, and a potent reminder that democracy, unity, unions and the upraised voice of the Little Guy really do work. Journalism is worth the battle, too.