“CRAZY FOR YOU” at San Diego Musical Theatre 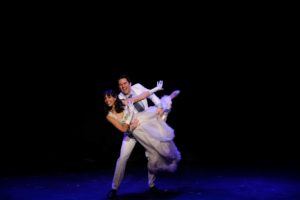 Actually, it’s dance-happy in lots of ways. Think: chorus lines, cowpokes, jazz moves and romantic ballroom numbers. Add in lots of cheeky, raunchy comedy. As the song goes, ‘Who could ask for anything more?’

To be honest, the story is beyond silly, based on the 1930s musical, “Girl Crazy,” with sublime songs by George and Ira Gershwin. The updated book, by Ken Ludwig, is clever and often laugh-out-loud funny.

You’ll recognize timeless, gorgeous songs like “I Got Rhythm,” “Someone to Watch Over Me,” “Embraceable You,” and “They Can’t Take That Away from Me,” all woven into a goofy tale about a wealthy New York banker who really wants to be a hoofer. He’s sent away by his disappointed, domineering mother to foreclose on a small theater in Deadrock, Nevada. The former gold-rush boomtown has collapsed into a lazy burg with just one woman, the adorable postmistress whose father owns the theater.

Needless to say, Big City Bobby falls immediately for small-town, tough-as-nails Polly, but there are hurdles to overcome, disguises and surprises to conceal and reveal, before Bobby saves the theater and gets his gal. A few other unlikely couples pair up to help bring the town back to life.

The San Diego Musical Theatre production is just about flawless. The set, costumes, wigs, sound and lighting are impressively elaborate. And the leads – Jeffrey Scott Parsons and Tayler Mettra — are mega-talented and smilingly irresistible. They both sing, dance and act to perfection. Comic wizard David McBean is hilarious in two roles.

It’s a great, big, old-fashioned musical, with a cast of two-dozen and a score that can’t be beat. As the Gershwins would say, “Nice work if you can get it.”