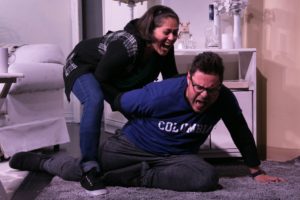 There’s something about family that brings out the child in all of us.

You can be a perfectly competent, rational adult – but the minute you return to the old homestead, you’re 8 again, bickering with your sister, brawling with your brother. And Mom always knows the right buttons to push to set you off.

“A Permanent Image,” a 2011 drama by Samuel D. Hunter, adds in a boatload of booze, a little pot, and a father who only appears on video.

Dad has just died, and his two grown children, who haven’t visited in years, have returned to Viola, Idaho for the funeral.

Bo is a political liberal who left home at 17, and is now an award-winning photojournalist who shoots ravaged children in war zones.

Ally, a Republican lesbian with a wife and son, lives just three hours away, but she’s totally consumed by the business she started.

They barely know each other, and they don’t recognize the place. Mom has painted every single item and surface white, in an effort to erase everything that came before. Also symbolically, given the ‘permanence’ in the play’s title, the videos their father has been recording throughout their lives, have been degrading, reduced to static.

Nobody really communicates here. The siblings undermine and debase each other. They talk about how awful their childhood was, but we never learn why.

At Point Loma Playhouse, there’s a whole lot of screaming going on, and only some of it seems to be in the script.

The complex characters — like wry humor and surreal situations, a hallmark of Hunter’s work — live lives of desperation. There’s a fixation on the Big Bang and the Apocalypse. Death is a throughline.

Too many unanswered questions and too much enigma here. But if you like to watch dysfunctional families that might make you feel better about your own, this one’s for you.