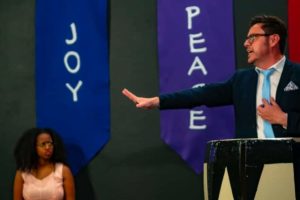 The audience is the congregation, being preached to (and sung to and danced for) by four traveling clerics who aim to minister to our souls. More or less.

But first, they have to degrade and shame us into submission – and belief in Jesus Christ.

The show begins with hellfire-and-brimstone. We can’t even see the speaker, but he’s demeaning us relentlessly for our mediocrity, hedonism, obliviousness and inaction.  We’re told we are “deluded babies,” each of us “a spiritual black hole.”

“Let go of your superficial earthly ties,” he exhorts, “and deliver yourself to the Lord. He will melt the selfish pig-fat from your face.”

This gives you an idea of the wildly shifting tone of the neck-snapping (if not mind-boggling) 2007 play by the Korean American playwright Young Jean Lee, a darling of the downtown (NYC), non-mainstream, experimental literati. Her plays are quirky, offbeat, and often off-the-wall. She has a penchant for presenting the uncomfortable. And the subversive. Check, check.

After the initial evisceration, we’re introduced to the three female reverends, who continue the in-your-face revival meeting by telling the intensely personal stories of how they found their faith, and then asking us for our “prayer requests” and passing the collection plate (a basket, actually, the cash targeted for a binational legal services organization).

The actors use their own first names: Reverend Laura (Preble); Reverend Veronica (Burgess) and Reverend Andréa (Agosto), though the sole man (Salomon Maya) among them is known, inexplicably, as Reverend José.  Incongruencies and inconsistencies abound.

The confessional stories, like the play itself, start out somewhat straightforward and go increasingly off the rails.

Young has said: “The premise that all of my shows begin with is, I ask myself the question: “What is the last show in the world that you would ever want to make?’ Then I force myself to make that show.”

She is admittedly grappling with her own beliefs. What she presents is a brand of Christianity that’s more provocation than consolation. The program at InnerMission Productions includes a link to a support and resource website called RecoveringFromReligion.org.

Hidden within the proselytizing and testifying is some gorgeous imagery (“trees made of water and fish made of birds”), followed by some truly whackadoodle stuff (the Mummies will eat cotton balls and drink your blood?). But the language needs to breathe. There needs to be space to consider and question, not just be barraged.

The piece requires a taste for the bizarre. Not every actor or director can achieve the right balance. A lighter, quirkier touch is needed than the InnerMission production provides.

Everything is played very earnestly – and pretty much on one note. It’s nice to hear Preble sing, and watch Maya escalate from sinister sermonizing to full-on fulmination and malediction.   But this is uncomfortableness with no payoff.

And where’s the Hope, Joy, Peace and Love sewn on banners hanging upstage? No Acceptance of The Other preached here.  This is all about saving your own (damaged, depraved) soul – via threat, humiliation and debasement. Not the church for me. Not even for 70 minutes.