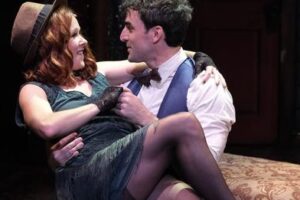 The brilliant, searing, 8-time Tony Award-winning Kander and Ebb musical, “Cabaret” (with book by Joe Masteroff) is set in a decadent, declining Berlin, 1931, just as the Nazis are seizing power and taking control.

I’ve seen productions where the whole cast is shot dead, or where they’re all crammed into cattle-car transport trains. I’ve seen some where the Emcee emerges during the finale as a Nazi — or a Jew.

At this crucial time in history, with the rising tide of fascism, sexism and racism here at home and abroad, it behooves a director to underscore the commonalities and relevances to our own era.

And yet, in his revival (Cygnet Theatre first produced the musical in 2011), consummate director Sean Murray seems to have harked back to the source material, the semi-autobiographical novel by Christopher Isherwood (“Goodbye to Berlin,” 1939).

So the final moments feature a kind of flashback dream sequence, with all the main characters replaying earlier scenes in simultaneous vignettes, as the American writer, Cliff Bradshaw (Isherwood’s alter-ego in the piece), begins to write about his time in the sordid city (“It was the end of the world… and we were dancing… and we were fast asleep”).

Revisiting this show now offers an ideal opportunity to underscore the painfully topical themes that course through it: abortion, a crackdown on the rights of minorities (especially Jews, as anti-Semitism and other racist sentiments have risen exponentially in the past several years; and also gays, as same-sex marriage seems to be next on the SCOTUS chopping-block).

From the get-go, this production, a remount of the one Murray helmed 11 years ago (for which he won a San Diego Theatre Critics Circle Awards for Outstanding Direction), has been dogged by Covid-induced postponements, performer cancellations and understudy substitutions.

The night I attended, three cast members were out sick/quarantining, including the lead, Karson St. John, who also won a critics Circle Award for her stellar performance as the Emcee.

It was a gutsy casting choice (maybe I’ll return again, to see her updated take on the sexy and menacing character).

Instead, Allen Lucky Weaver, who started out in the ensemble, as a Kit Kat Girl, Helga, stepped in as understudy.

He does a fine job, vocally and dramatically, but I didn’t get a sense of the danger — and at the end, he was pretty much the same as at the beginning.

Wil Bethmann is solid and credible as Cliff, a gay/maybe bisexual man who falls in love with the chanteuse Sally Bowles. He’s more than willing to save her from her own excesses, to spirit her away to his hometown in Pennsylvania to save her from the oncoming onslaught in Germany, and to raise their child.

Sally, street-wise but politically incredibly naïve, is having none of it. She wants to live her hedonistic life to the fullest.

The mega-talented Megan Carmitchel, who gives off a wholesome, girl-next-door vibe, has the steepest character arc in this production, devolving into a cocaine- and gin-addicted mess. When, at the end, she returns to the sleazy, abusive club owner, Max (looming, ominous Luke H. Jacobs) and gets back on the stage to sing the title song, it’s no upbeat anthem to survival. She’s broken, and she completely breaks down. It’s a wonderful performance.

Sally may be the glittering centerpiece of the show, but its beating, breaking heart is the late-life, doomed romance between the German landlady Fraulein Schneider and the Jewish fruit-merchant Herr Schultz. In this production, it’s even more poignant, as played by Linda Libby (reprising her role from 2011) and her real-life husband, Eddie Yaroch. They’re so sweet together; we root for them to work it out, bricks through the window be damned.

But when she steps downstage and sings the gut-wrenching pragmatist’s conundrum, “What Would You Do?,” it forces every one of us to ask ourselves precisely that . And not just theoretically. For us, too, “the storm (is) in the wind,” “the walls (are) closing in.” Do we turn a blind eye, or take a stand?

In the wildly creative structure of the show, most of the songs are performed as cabaret acts at the squalid Kit Kat Klub, each a kind of caricatured, musicalized Greek chorus, providing commentary on what’s going on in the plot and in the country (e.g., anti-Semitism — “If You Could See Her,” a provocative love song between the Emcee and a tutu-wearing, cavorting but here, highly simian, gorilla; and the chilling Nazi promissory note: “Tomorrow Belongs to Me”).

Here, the Nazi aspect is subtle — no big, red swastika flags or storm-troopers. No plethora of armbands. It’s the pure, high-tenor voice of a Hitler youth that gets me every time (Trevor Cruse sings it beautifully). Often, I’ve been reduced to tears as that number ended the first act.

But not this time. The terrifying reality of its seduction of autocracy, even in the act-ending reprise, with the rest of the company joining in, doesn’t land.

It was also something of a surprise that the Kit Kat orchestra, always described by the Emcee as “beautiful,” is not a gaggle of scantily-clad gals. Of the six skillful musicians (under the baton of musical director Patrick Marion), only one has a female name — and they’re all dressed in staid, somber black.

Down below, the set, based on Sean Fanning’s original design, seems less tawdry than the last time, as do the costumes (Zoë Trautmann). The lighting (Amanda Zieve) leans heavily on a mirror ball. The sound (Evan Eason) is clear. Katie Banville’s choreography works well.

I was certainly moved. But I wanted to be devastated, to feel that this was not just a vague cautionary tale but an urgent exhortation to wake up, an eye-opening reminder of what’s going on outside our own little Kit Kat bubbles. Our republic, like that of 1931 Germany, is at peril, under attack. And no song can sing that away.

8/13/22 Addendum to my review, after seeing “Cabaret” a second time

So glad I got to go back and see the show with the full original cast. Three actors were out with Covid when I first went — including Karson St. John as the Emcee, the centerpiece of the musical.

She brings a terrific energy, charisma — and menace — to the role, which is marvelous.

The company seemed tighter, the Nazi elements more ominous, and the whole cautionary aspect of the production more focused, edgy and effective.