“AS YOU LIKE IT” at New Fortune Theatre Company 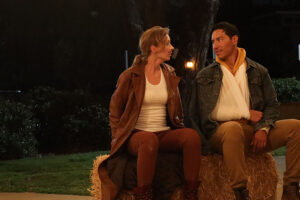 Oh, to have an Arden to escape to! A magical forest where you can be who you want to be and become who you’d like to be, reconnect with estranged family, and find true love.

It’s always felicitous when a play with an outdoor setting is performed outdoors (another Shakespearean forest is currently being featured at The Old Globe for “A Midsummer Night’s Dream”).

Now, it’s a double delight — to have an under-the-stars “As You Like It” coupled with the return of New Fortune Theatre.

The acclaimed company (a revised, upgraded version of Poor Players) was on hiatus even before the pandemic shut everything down, because co-founders (and longtime partners) Richard Baird, artistic director, and Amanda Schaar, executive director, couldn’t find any affordable places to stage their productions (ever a problem in San Diego).

They’ve located ideal spot for their latest offering: the amphitheater outside the Westminster Presbyterian Church in Point Loma (the indoor venue has been used by the San Diego Shakespeare Society, so the stage was already set, so to speak).

The pastoral comedy, thought to be written in about 1599, is a paean to love in its many forms: love at first sight, lost love, unrequited love, love rebuked, and love disguised. All of Shakespeare’s comedies end in marriage; this one ends with four.

The central relationship is a long-delayed romance between Rosalind (Amanda Schaar), the daughter of Duke Senior (Neil McDonald), and Orlando (Steven Lone), the son of Duke Frederick (also Neil McDonald).

Frederick has usurped the French duchy where the piece is set, and exiled his older brother; he allows Rosalind to stay at his court only because she is the BFF of his only child, Celia (Rachael VanWormer).

Meanwhile, Orlando is persecuted by his older brother, Oliver (Michael Rodriguez), and he’s forced to flee before his brother kills him.

When Orlando first sees Rosalind, he’s smitten. It’s mutual. Then the cruel Frederick decides to banish her. But Celia won’t be parted from her, so for safety’s sake (women alone in the forest, and all), they assume disguises: Rosalind as a young man, Ganymede, and Celia as “his” poor sister, Aliena. The women are accompanied by the court fool, Touchstone (Brian McCann), while Orlando is attended by his faithful old servant, Adam (Danny Campbell.

They all take off for the Forest of Arden, where the amiable Duke Senior lives a homeless exile life with his friends and followers, including the melancholic Jaques (Richard Baird), ever in search of a wise fool.

There are various and sundry country folk in the forest, and love remains elusive for a long time, until everything gets sorted out — mostly by Rosalind (as Ganymede), though she’s caused some of the problems, too, since Phoebe (Taylor Henderson) falls for Ganymede, and “he” tries to help the lovesick Orlando by posing as Rosalind and forcing him to woo her, just for practice.

Even with some tweaks to the text (we don’t see Adam die, for instance), here are still darker moments in this production; lots of longing, some sadness and sense of loss, but mostly, it’s light, comic fun, language-rich and well done, under the acute direction of Dan Hodge, an alumnus of The Old Globe/USD Graduate Acting MFA program.

I had only two directorial (or were they sartorial?) questions.

Why is everyone suddenly barefoot at the end? (as my husband put it, ‘Who would walk barefoot in a forest?’).

And why, after going to the trouble to look just like a young man, as planned (moustache included), does Rosalind suddenly abandon her vest so that her womanly breasts are clearly noticeable under her tight white shirt? (Now that’s some serious gender-bending).

Throughout, however, the performances are delectable.

Schaar is a wonder; funny and articulate, smart and savvy. A perfect match for Lone’s Orlando, far more manly, spirited and spined than the often mopey, weepy milquetoast some portray him as.

VanWormer’s Celia is adorably paired with Schaar; even their brightly colored outfits (costumes credited to Baird and Schaar) are a delight. After the forest-change, Celia looks somewhat like a drab girl scout. But her WTF facial expressions, when her buddy is working her wiles, are a hoot. And her matchup with a much-changed Oliver is a pleasant surprise. We don’t want her to miss out on the ardor of Arden.

McCann’s Touchstone is a marvel of clownish cavorting, physical and verbal hijinks and hat tricks. His high-speed “Seven Degrees of Lying” is a flawless counterpart to Baird’s more somber “Seven Ages of Man.” Jaques gets some of the Bard’s best lines/speeches here; Baird also nails “All the world’s a stage.”

McDonald isn’t the only one to play multiple roles, among the engaging cast of 14, and they all acquit themselves admirably. Christopher M. Williams’ fight choreography is quite credibly executed.

As the attending lord and musician, Amiens, Jaden Guerrero has created a charming score, which he sings and plays effectively on various stringed instruments, augmented by pre-recorded elements. With all the music and dance, though, the running time feels a tad long. (And the cast has a long way to go for their entrances and exits).

To cap off some of the bittersweet sentiment of the play, the entire cast ends singing Modern English’s 1982 hit, “I’ll Stop the World and Melt with You.”

During the pandemic, the band re-recorded a “From Quarantine” rendition, which went, appropriately, viral.

“It does feel like the world is coming to an end, doesn’t it?” wrote songwriter Robbie Grey. The comments left a definitive impression that “it cheered [people] up, or it made them feel better. It’s pretty clear that it still resonates today.”