“BOOK OF LEAVES” streaming from The Roustabouts Theatre Company 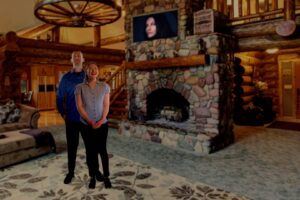 It’s a familiar setup. Estranged, dysfunctional family is summoned together one last time by an ailing parent approaching death (and revising his estate plan).

But Will Cooper’s “Book of Leaves” has some tricks up its verdant sleeves.

Nothing and nobody turns out to be what they seem. Relationships run deeper than at first glance. Family and legacy ultimately take primacy.

There are, of course, the requisite secrets and lies (lots of the latter) among the widowed father and his icy, long-married daughter and his perpetually single, floundering, self-absorbed son.

The daughter, Beth (Leigh Akin) has come nestling her long-standing antipathy like a spiky pet, with her loose-lipped, inebriate husband, Jack (Durwood Murray) in tow.

Her spoiled dilettante brother, Prince (Justin Lang) arrives with his latest girlfriend, adoring and acquiescent Sylvie (Maybelle Shimizu), who seems to be the only one among these cityfolk who actually enjoys the grand, forested homestead as much as the patriarch.

Over the course of one weekend laid out in 13 scenes, revelations, both emotional and physical, upend the entire dynamic.

Most unexpected is the physical reveal: the titular books of leaves that were created by and with Beth and Prince every Fall when they were growing up, as they ceremoniously searched for a favorite leaf, then had to write about why they chose it and what they were feeling at that time.

Unbeknown to them, through the years they’ve been gone from the sprawling, rural domicile (which they both seem to loathe, finding it overly dark and too-densely treed), their dispassionate, intractable father has continued the scrapbooks, lovingly documenting the developments of their lives. And as for the excess of trees, he had planted a sapling for each of those he loved and many others to make up for all the trees felled in his work as a builder.

These revelations lead to rather abrupt turnarounds: hatred dissolves; the narcissistic one becomes compassionate; the spineless one develops a backbone; the marriage isn’t as hopeless as it seems, and more.

Playwright Cooper, who has a brisk, believable way with dialogue, is a co-founder of The Roustabouts (along with Phil Johnson and Ruff Yeager), who are producing the West coast premiere of the piece, first presented as a reading in Chicago.

This production, also billed as a reading, was filmed in April of this year, respecting the COVID guidelines at the time. The cast never came together; they were filmed individually, then placed in front of attractive greenscreen backgrounds created by Emmy Award-winning cinematographer Michael Brueggemeyer.

But ‘floating’ the characters in this space like paper dolls and having them appear and disappear like ghosts is unnerving, compounded by the fact that they can never face or directly address each other, and don’t seem to know where their scene-partner might be situated.

For all the grounded family interactions and realistic settings, this gives an inappropriately otherworldly feel to the proceedings. I think I might have preferred watching it as a Zoom reading, with some sense of relative position and proximity.

Still, the gifted director Kim Strassburger has teased excellent performances from the skillful cast. Tom Stephenson is highly controlled and hard-headed as the father, though he softens and becomes remorseful toward the end. Kandace Crystal adds energy as an exaggeratedly phony realtor.

All told, it’s a heady mix of talent, creating credible, if mercurial, characters. This was an interesting experiment, but it would be excellent if a fully-staged live production (with the same cast, together in a theater space), could be on the docket for The Roustabouts’ next season.