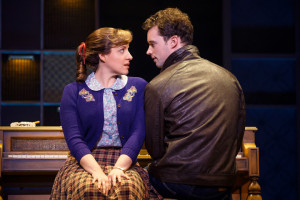 “Beautiful: The Carole King Musical” takes you on a heart-rending journey. It’s the story of one woman’s evolution from awkward Brooklyn songwriting wannabe to singing superstar. But it’s also the tale of two working partnerships and marriages: one that succeeds, one that doesn’t. And it’s a chronicle of the music styles and clothes of the 1960s and ‘70s.

Carole Klein, who became Carole King, was just 17 in 1960 when she got pregnant and married and had her first mega-hit, “Will You Love Me Tomorrow?” She and her husband, Gerry Goffin, went on to collaborate on chart-toppers like “Up on the Roof,” “One Fine Day” and “(You Make Me Feel Like) A Natural Woman.” Their best friends were another writing team, Cynthia Weil and Barry Mann, with whom they were amicable competitors. That couple, which created hits like “We Gotta Get Out of This Place” and “You’ve Lost That Lovin’ Feelin,’” is still going strong, married for 58 years.

Carole and Gerry didn’t fare so well. He was an emotionally unstable serial adulterer, and their divorce nearly destroyed her. But it also helped her find her voice, and in 1971, she released “Tapestry,” one of the best-selling albums of all time.

All this appears in the 2014 musical, with a book by Douglas McGrath, and a score featuring songs by King and her colleagues, deftly woven into the story in meaningful ways: auditions, recording sessions and the like.

One of the most intriguing parts of this national tour is that the title role is played by Abby Mueller, the older sister of Jessie Mueller, who won a Tony Award for her warm, affecting performance as King on Broadway. Abbie is clearly equally talented, with a powerhouse voice, a credible warmth, and the acting chops to make us care about her story.

Her castmates, including the adorable Becky Gulsvig and Ben Fankhauser as Weil and Mann and hunky Liam Tobin as Goffin, are excellent. The ensemble is multiply-talented, playing various roles and instruments. The costumes are wonderfully era-defining, and the sound is notably sharp and clear.

If you know or remember these songs, you’re destined to love this show. And you will still love it tomorrow.