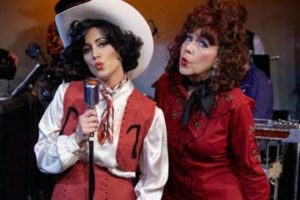 What could be better for a fervent fan than to have the object of your adoration eating  bacon and eggs in your kitchen?

The story behind “Always… Patsy Cline” is so far-fetched, it could only be true.

The first time Louise Seger heard Patsy Cline sing, in 1957, she said, “that voice absolutely stopped me dead in my tracks.” She started calling in to her local Houston radio station every day, requesting Patsy songs.

In 1961, Patsy Cline came to Houston for a concert. Louise was the first to arrive at the Esquire Ballroom, and she met Patsy, later inviting the singer to her home. They stayed up all night talking.

When she left, Patsy promised to write, and she did, for the rest of her life – which was cut short by a plane crash two years later, in 1963. She was 30 years old.

Patsy was acclaimed as one of the most influential vocalists of the 20th century, a trailblazer who, crossing over from country to pop, sold tens of millions of records. Her life and work have been celebrated in books, films and plays.

The 1988 small-scale musical, conceived by Ted Swindley, has been presented Off Broadway and nationwide. The current North Coast Repertory Theatre production perfectly captures the era, the dialect and the music of Patsy and star-struck, jocular Louise.

With wit and heart, Alegra Libonati directs two fabulous veterans of the show.

Agile, playful Cathy Barnett has portrayed Louise across the country. She jovially interacts with the audience and makes fun references to San Diego landmarks and obsessions.

Adorable, charming Katie Karel is terrific as Patsy, with a powerful voice that impeccably blends vibrato, twang, ache and grit. Each of the 27 songs is rendered beautifully, backed by an excellent, versatile 4-piece band, music-directed by ace keyboardist Daniel Doss, another veteran of the show.

Even if you’re not a country music fan or aficionado, you’ll be transported by this mega-talented Patsy and her exuberant pal.