“A CHRISTMAS CAROL” at Cygnet Theatre 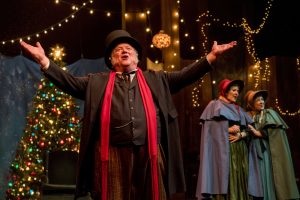 It just isn’t Christmas without “A Christmas Carol.” Every year, we need to be reminded to live a life of generosity and open-heartedness.

This is Cygnet Theatre’s seventh inventive production. Artistic director Sean Murray started his adaptations with a radio play. Over time,  he’s expanded the show into a full production and has added many changes, but he’s maintained the clever, onstage making of sound effects.

This year, much of the excellent, flexible cast returns – each playing a bevy of roles, changing accent, class and character on a dime (Make that a shilling). The Victorian costumes are charming, the sound and lighting exemplary.

At the center of this song-filled presentation is Tom Stephenson, as that miserly meanie Ebenezer Scrooge. His marvelous performance is credible, grounded and multi-layered. The others literally swirl around him, singing as much as they speak.

Christmas carols abound, of course, but now, some of the words Charles Dickens wrote in his beloved 1843 novella are also sung. Music director Patrick Marion plays piano throughout, many of his backup melodies being his own creations. Charles Evans Jr. sometimes adds guitar accompaniment.

Much of the story is played for humor – especially by golden-voiced Melissa Fernandes and Melinda Gilb, but the rest of the cast contribute mightily, especially Evans as young Ebenezer; David McBean as two of the ghosts; Megan Carmitchel as Ebenezer’s youthful paramour, Belle; and Patrick McBride as Bob Cratchit and a raggedy swindler. The young people are played by well-manipulated, Victorian-looking life-size puppets.

Some of the most aching or tender moments – between Ebenezer and Belle, or the scene at the graveyard – are genuine tear-jerkers. The Ghost of Christmas Future is imaginatively spooky. And after his long night of self-examination, the sheer, youthful exuberance of Scrooge’s revelation and redemption is truly heart-warming and delightfully infectious.

It’s been a while since I’ve been to Cygnet’s “Christmas Carol.” It seems a bit more over-the-top and less nuanced now, but the vocal harmonies and arrangements are superb and the message — encouraging kindness, benevolence and tolerance — couldn’t be more timely.