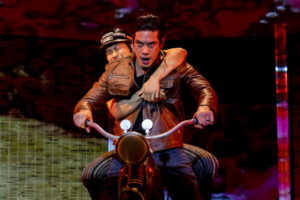 It’s not surprising that divisive politics and our collective anxiety crept or stomped their way into many theatrical productions in 2018.

From overtly political work like “Building the Wall” at the Point Loma Playhouse and “King Charles III” at Coronado Playhouse, to more subtly subversive plays like “Seize the King” at La Jolla Playhouse, the state of the nation was very much on theatermakers’ minds.

The first production of the year, the phenomenal tour of the mind-blowing musical, “Hamilton,” set the tone with its infectious rallying cry: “Immigrants — we get the job done.”

From Diversionary Theatre’s homophobic histories “Bull in a China Shop” and “This Beautiful City” to the racism in its “Cardboard Piano,” and the anti-Semitism in The Roustabouts’ “A Jewish Joke,” minority groups took a shellacking onstage.

There was the usual spate of dramatically dysfunctional families, in “HIR” at Cygnet Theatre, a wonderfully intimate “Uncle Vanya” at The Old Globe, and the superb “Fun Home” at the San Diego Rep.

Female subjugation featured in the Globe’s outstanding “A Thousand Splendid Suns” and “The Wanderers,” and “Bliss” at Moxie Theatre. But women triumphed in “The Last Wife” at Cygnet, “On Your Feet” and “Waitress” at the Civic, and the superb “A Doll’s House, Part 2” at San Diego Rep.

Quirky love stories surfaced in the fabulous “Once” at Lamb’s Players Theatre, the expertly-sung “She Loves Me” at Scripps Ranch Theatre and charming “Miss Bennet: Christmas at Pemberley” at New Village Arts.

Silly fun served as antidote to the darkness in “Spamalot” at Cygnet, “”Xanadu” at OnStage, “Young Frankenstein” at San Diego Musical Theatre and “A Funny Thing Happened on the Way to the Forum” at North Coast Rep.

2019 looks to be a little lighter-weight, but there will still be plenty of angst.

Just keep seeing theater; it shows us who we are, and what we’re thinking about. And making you think is what theater does best.