2018 BEST OF THE YEAR IN SAN DIEGO THEATER 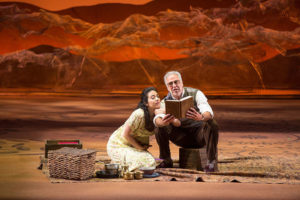 From campus rape to the plight of immigrants, from racism, sexism and homophobia to the subjugation — and self-assertion — of women, this year has been a dramatic doozy. And, whether directly or indirectly, by name or by inference, Trump was a palpable presence, as was the collective anxiety of most of the country in the fraught year we all just survived.

My Top 10 plus 1 were all potent plays and productions —  provocative, masterfully written, and excellently performed and directed. I list them here in no particular order – except for the first two.

The Afghanistan-set story, based on the marvelous 2007 novel by Kabul-born Californian Khalid Hosseini, may have been harrowing (because of the abuse and denigration of women it portrayed), but the production was mind-boggling, and highlighted the resilience, defiance and unflagging spirit of two indomitable females. This knockout co-production of The Old Globe, the American Conservatory Theatre and Theatre Calgary, was as splendid as its poetic title, under the magnificent direction of Carey Perloff (who extended her San Diego stay to direct a superb production of “queens” at the La Jolla Playhouse right after this one; see below). “Splendid Suns’” beautiful imagistic set, lovely score (much of it played on the musical saw) and evocative lighting and sound added up to an extraordinary evening that underscored, even in the very worst of circumstances, the enduring hope for a better, freer life.

An audacious undertaking by Lucas Hnath that won the 2017 Tony Award for Best Play, this sequel to Henrik Ibsen’s 1879 classic was a wildly imaginative continuation of the story scholars often cite as the first stirrings of female empowerment (and, by extension, feminism). From a 21st century perspective, Hnath re-ignited the controversy the original sparked: What is a woman’s duty to her husband? Her children? Her home? Herself? Fifteen years before this new drama begins, Nora Helmer walked out and slammed the door. Her unexpected return to her husband’s house introduced twists and surprises, with multiple viewpoints resonating in both the 19th and the current century. The Rep production, sensitively and astutely directed by Sam Woodhouse, featured arguably the best performance of the year, from Sofia Jean Gomez as Nora.

Martyna Majok’s title refers to both the New York borough and, with tongue in cheek, the struggling, wary, tough-as-nails immigrant women (from a range of countries) who uneasily co-habit a subterranean apartment, flying under the radar of authorities, often unable to contact the families they agonizingly left behind to find a better life. The scenic and lighting design were inventive and imaginative. A terrific ensemble of six was exquisitely directed by Carey Perloff. After two dazzling productions in one year, she’ll be welcome back to San Diego any time.

Another immigrant story (see “Hamilton” and “queens” above), with poignant – and hilariously comical – overtones. Playwright Qui Nguyen took us from ninja to rap, satire to slapstick, to convey a touching love story set, in Vietnam and the U.S., against an aching political backdrop. Jesca Prudencia, a stellar director, balanced the comedy and drama with considerable expertise and dynamic pacing, as she did in another Rep show, “Actually” (see below). We’re so fortunate that she’s now a local, teaching at SDSU. Hopefully, we’ll see a lot more of her impeccable direction in the near future. Her production of this 2016 semi-autobiographical play featured two outstanding performances: hunky Ben Levin as the romantic lead and a local who’s become an acting chameleon: Shaun Tuazon, who malleably played five disparate characters (and was also notable in multiple humorous roles in “The Loneliest Girl in the World,” at Diversionary Theatre).

This small-scale 2012 musical, an eight-time Tony Award winner based on the quirky 2007 film, could not have gotten a better, warmer, more intimate production than the one under the superlative direction of Kerry Meads, showcasing a phenomenal 12-member ensemble that doubled as the show’s mega-talented band, with instruments ranging from cello (try doing choreography carrying that around!), violin, accordion and so much more. Musical director G. Scott Lacy made a welcome return to San Diego for the show, which was flawlessly designed by our local scenic whiz, Sean Fanning, including a working bar for all to utilize fully during intermission. A sensational central performance by Caitie Grady, with a wholly credible Czech accent and an idiosyncratic demeanor, anchored this gorgeously played and sung show about taking chances, making commitments and honoring obligations.

Another winning production from artistic director Sam Woodhouse, who cast and directed wonderfully – from the young people to the divine leads playing daughter and father (Amanda Naughton and Jim Stanek, both veterans of the musical), to convey the dysfunctional family story (is there any other kind?) Alison Bechdel first presented in a 2006 graphic novel. Strikingly told in memory flashbacks, it’s about Alison’s coming out, discovering her father was also gay, and dealing with his untimely death (most likely by suicide) shortly after she revealed her sexuality to her parents. As college-age Alison, Claire Adams gave a memorable performance. Impressively and minimally designed by the ubiquitous Sean Fanning, the show was unforgettable (and in my opinion, superior to the L.A. production).

A funny and sometimes intense exploration of enculturation and assimilation, this 2016 comic drama by acclaimed playwright/TV writer Tanya Saracho paints a fascinating picture of what it’s like to be Latinx (especially Mexican) in present-day America.  In 95 fleet minutes, the two-hander, directed by Patrice Amon (co-founder of TuYo, a burgeoning new company devoted to Latinx theater productions), covered a wide swath of subjects:  race, class, identity, authenticity – and trading ethnic solidarity for career opportunity. Buenos Aires-born Sofia Sassone was divine as the manic Lucia —  self-involved and upwardly-mobile-at-any-cost, playing beautifully off the remarkably genuine, unaffected  Javier Guerrero, as the American-born Mexican janitor who gets left behind. A funny and fiery production from a gifted writer and director.

My Best Of list is rounded out by three sublime musical productions – oldies (at least in two cases) but unequivocally goodies:

The most recent of the three musicals (2012), based on the 1992 Disney musical film of the same name, was inspired by the real-life New York City Newsboys Strike of 1899. With music by Alan Menken, lyrics by Jack Feldman, and a book by Harvey Fierstein, the show got a glorious production at Moonlight last summer. Galvanizing direction (Larry Raben) and choreography (Karl Warden) brought this David/Goliath story to life: a tale of the impoverished, young underdog newsboys triumphing over the affluent, indifferent industrialist Joseph Pulitzer, who tried to cheat them by decreasing their already meager pay (26 cents a day) for the sake of his own bottom line. Dillon Klena headlined a stunning cast — great singers and dancers all — with a radiant performance by a little local pro (who already has Broadway credits): Noah Baird.

Another Moonlight winner this year, the timeless Kander & Ebb musical, 22 years and counting on Broadway, has come to town on tour several times. But under the invigorating co-direction of James Vásquez and Terra C. MacLeod, two Broadway veterans of the show — co-director MacLeod and San Diegan Roxane Corrasco — were electrifying, in their singing, dancing and comic turns. A wholly satisfying production, but these two really made it sing.

Artistic director David Ellenstein, who had a fabulous year (he also directed, the deliciously unpredictable mystery, “Holmes & Watson”; the intense drama, “The Father,” about dementia; the idiosyncratic philosophical contemplation, “This Random World”; and the darkly comic “A Jewish Joke” for The Roustabouts Theatre Co.), pulled out all the casting stops to present a  stupendous production of this classic (the Tony Award-winning Best Musical of 1962) with a superstar pedigree: music and lyrics by Stephen Sondheim, book by Burt Shevelove and Larry Gelbart.  The extraordinarily funny and talented cast – the biggest ever at the cozy theater: 13 actors, ten of them members of Actors Equity —  included side-splitting Omri Schein as the wily slave, Pseudolus; physically ultra-agile Kevin Hafso Koppman as the frenetic, aptly-named slave, Hysterium; and buff Jason Maddy as the bloviating, bombastic captain, Miles Gloriosus. Farce at its finest.

“Romeo, Romeo and Juliet,” a smart, new, gay-friendly riff on Shakespeare, written by Roustabouts co-founder Ruff Yeager, with a killer performance by Michelle Marie Trestor as the clueless, titular heroine

“The Great Leap,” a new China-and-sports-oriented play by UCSD MFA alum Lauren Yee. Funny and political, as all her works are, this was presented as a reading at The Old Globe, and should make a fully staged return soon (it has already been produced Off Broadway)

“Actually,” at the San Diego Rep, helmed by our newest star-director, Jesca Prudencia, turned a laser-beam on campus rape and sexual consent, with exhilarating performances by two other UCSD alumni, DeLeon Dallas and Emily Shain

The touring productions of “On Your Feet,” “School of Rock” and “Waitress” at the Civic Theatre. The first two were rousing and dance-happy; the third was filled with heart – and life-changing pie

Jay O. Sanders, in a delectably intimate turn as Chekhov’s “Uncle Vanya” at The Old Globe

Kate Burton, wonderfully potent and maternal as Prospera in The Globe’s glorious outdoor production of “The Tempest,” with amusing inebriates Stephano and Trinculo performed as gut-busting vaudevillians by Robert Dorfman and Andrew Weems

Riveting Wrekless Watson, who took the most ravaging emotional journey in “Cardboard Piano” at Diversionary Theatre

Versatile actor/writer/director Hannah Logan gave a remarkable performance in InnerMission’s “Melancholy Play,” a part that required her to shift emotional states on a dime

DeAnna Driscoll, a whirlwind of skillful Monster Momism in “HIR” at Cygnet Theatre  — a seeming continuation of her transfixing turn last year in “The Effect of Gamma Rays on Man-in-the-Moon Marigolds”

Special mention goes to Cygnet associate artistic director Rob Lutfy, who directed both the aforementioned productions. He makes the edgiest play choices in town, and shepherds them with wit and intelligence. This year, he also helmed “The Wind and the Breeze,” “Every Brilliant Thing,” and “The Last Wife,” all to excellent effect

See how much fantastic stuff you missed? Don’t let it happen again. See lots of equally enchanting and thought-provoking theater in the New Year…. And be sure to make it a Happy one.