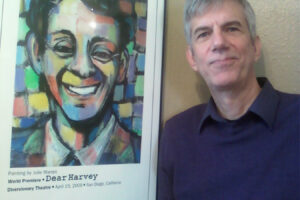 Ira and Patty and Thomas and Dan. It takes a village to pay tribute to Harvey Milk.

Milk, a prominent and dynamic civil rights activist, was the first openly gay elected official in the history of California. He championed the rights of all people: gay, women, the elderly, minorities and union members. But in 1978, after serving only 11 months on the San Francisco Board of Supervisors, he was assassinated (along with San Francisco Mayor George Moscone) by a fellow Supervisor who had just been the sole dissenting vote against the Human Rights Ordinance Milk had proposed and Moscone had signed. Milk was 48 years old at the time of his death. He weas posthumously awarded the Medal of Freedom by President Obama in 2009, and in 2016, the USNS Harvey Milk became the first ship named for a gay leader.

He commissioned Patricia Loughrey, at the time a local playwright and professor at San Diego State University, to write a tribute to Harvey Milk. She invited Thomas Hodges, a pianist/composer and student in her playwriting class at SDSU, to create an original score for the piece. Both have gone on to collaborate on other work and win accolades nationwide, individually and together. Hodges said that “Dan helped me see the hope, and pushed me to push for the positives in my music.” Loughrey said “I wouldn’t be where I am in my career if not for Dan Kirsch. That Harvey Milk spirit was Dan’s spirit. Dan was a friend to everyone he met, just like Harvey.”

In 2009, Kirsch directed the world premiere of Loughrey’s play, “Dear Harvey,” a verbatim, documentary-style ensemble piece recounting the life and legacy of Milk, as told by those who knew him best.

A young Ira Bauer-Spector, an MFA Musical Theatre student at SDSU, was in the audience, on a third date with his soon-to-be husband. They cried together at the end.

The next year, when Diversionary presented a staged reading of “Dear Harvey” to celebrate the first Harvey Milk Day in California, Bauer-Spector was in the ensemble, and was asked to travel with the cast to perform in what became an award-winning FringeNYC production, produced by Diversionary and directed by Kirsch. A recent graduate with no money and no place to stay in New York, Bauer-Spector was interested but hesitant. Dan graciously invited Ira to crash in his rental apartment for the three weeks of the Festival. During the run of the show, Ira proposed to his fiancé, Nathan, outside the Stonewall Inn.

After they returned to San Diego, Bauer-Spector remained active in the theater community. He directed nine productions for San Diego Junior Theatre and was involved in multiple productions at Diversionary. Since 2015, he has served as marketing manager for the San Diego Civic Youth Ballet. In 2017, he earned the Betty Peabody Emerging Young Leader of Balboa Park Award.

Through it all, he remained devoted to “Dear Harvey” — its main character, its message of love and hope, and its director.

In 2011, he directed a shortened version of the piece that was co-produced by SDSU and the Harvey Milk Foundation and presented at an international conference of school counselors; it subsequently toured San Diego high schools.

In 2013, Bauer-Spector founded Breakthrough Workshop Theatre (BWT), a nonprofit educational company with a mission to provide short-term theater experiences for artists of all ages and backgrounds, especially those who can’t participate in traditional theater productions because of work, school, family or other time constraints.

People, in other words, as Bauer-Spector puts it, who are “long on passion but short on time. We encourage those folks to better themselves through theater, to achieve a breakthrough — emotionally, dramatically or technically.”

BWT has produced 55 projects in the past seven years, including “staged readings, musical concerts, development presentations and minimalist productions.”

The company has involved 193 artists in 818 “artistic opportunities.” Many have come back to participate in 10, 15, even 20 projects. There’s no charge to participants; BWT is supported by ticket sales (they have no homebase, but often perform at Martini’s Above Fourth) and six consecutive grants from San Diego Pride.

Their very first project was “Dear Harvey,” which became an award-winner at the first San Diego Fringe Festival. With an all-youth cast, the piece became a Special Event at the 4th San Diego Fringe.

Every year since its inception, BWT has presented “Dear Harvey.” It has become an annual tradition.  Bauer-Spector and his husband, Nathan Bauer-Spector, even renewed their vows on the stage one time.

But this year, for what would have been the ninth incarnation of their “Dear Harvey” presentations, not only were they thwarted by the COVID-19 pandemic, but something else drastic and unexpected occurred.

In February, Dan Kirsch, the beloved initiator of the play, died of a sudden illness in Charlotte NC, where he had spent a good deal of his professional life, as an LGBTQ+ mover-and shaker, before and after his six-year tenure at Diversionary Theatre. Bauer-Spector has called Kirsch “the Harvey Milk of North Carolina” and “the Johnny Appleseed of the LGBT community.”

For this June Pride Month, Bauer-Spector decided to create a film (his first ever, his own artistic breakthrough) that would pay tribute not only to Harvey Milk, but also to Dan Kirsch. The work interweaves monologues from the play with stories from the creators and artists who have been changed by their participation with the work.

“The Stories of ‘Dear Harvey,’” was created via individual Zoom sessions with 24 artists who have been involved with “Dear Harvey” over the years. It marks Bauer-Spector’s 13th time working with the material in one form or another.

“I’ve witnessed firsthand the power this play can have to change perspectives and build bridges of empathy between communities,” he says.

He’s thrilled that Daniel Nicoletta, a San Francisco photographer who was a close friend and early employee of Harvey Milk, provided access to his work (which, along with Nicoletta himself, appeared in the 2008 film, “Milk”). Once again, Thomas Hodges has created an evocative musical score.

The 90-minute documentary, curated and edited by Bauer-Spector, will be presented in free virtual viewings on YouTube and Facebook, three times only. Each showing will benefit a different cause; viewers are invited to contribute, if so inspired. After each presentation, there will be a live follow-up experience: a Thomas Hodges concert, Q&A or Dan Kirsch remembrances.

“Dan Kirsch was a dear friend and mentor of mine,” says Bauer-Spector. “And while I never met Harvey Milk, he continues to be a guiding beacon of inspiration in my life. My work on this film was focused on honoring the legacies of both of them, on continuing to recognize the trails they blazed for me, and for all of us.

“The involvement of young people provides living proof that their legacy matters. And knowing that because of this film, their stories will be reaching homes and communities all across the nation and the world — that gives me tremendous pride.”