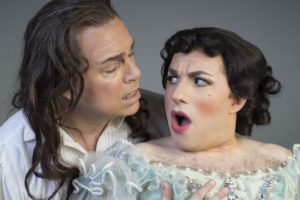 Maybe you remember the gloomy moors. Or Catherine calling out from beyond the grave, to her beloved Heathcliff. Or perhaps you recall Laurence Olivier chewing up the scenery in the 1939 film.
Whatever you recollect of the timeless classic created by that “untalented, prune-faced, frigid Gothic” writer (that would be Emily Brontë, and her only novel, “Wuthering Heights”) it’s in the satirical spinoff, “Withering Heights,” a world premiere written and performed by those two comical nutballs, Phil Johnson and Omri Schein.
The book is fertile fodder for spoofing. It was published in 1847 under a pseudonym, Ellis Bell (it was the 19th century, after all, and she was… well, a woman, who died a year later, at age 30). The novel was controversial when published, because it challenged Victorian ideals of religion, morality, social class and gender inequality. So, that offers plenty to elaborate, exaggerate, embroider and distort (all that violence and death!).
The program shows the duo playing 14 characters, but it feels like a cast of thousands, of all classes and genders and proclivities.
Surprisingly, give the sheer lunacy on the Diversionary Theatre stage (produced under the banner of the new Roustabouts Theatre Company, of which Johnson is a co-founder), they hew pretty darn close to the original.
It’s a deep, dark, deadly love story. The maid, Nelly, our narrator, keeps the count going: 10 deaths in 90 minutes. She says “that woman out there” (i.e., Brontë) “got it wrong,” and she’s going to tell us “the real story.”
So, we’re introduced to demure, over-protected, slightly ditsy Catherine (Schein) and hairy-chested, boorish Heathcliff (long-haired Johnson – credit wigmaster Peter Herman), the star-crossed lovers who grow up together and are inexorably, and fatally, attracted.
But her hostile brother, Hindley (Johnson) mistreats and abuses Heathcliff. Then their father (Schein), who had loved and protected the gypsy orphan, dies (that’s #1).
Many weird experiences and oddball interactions ensue — including a hilarious encounter with a dog (Johnson and a sock puppet) who attacks Heathcliff (Johnson rolls around on the ground as attacker and victim, both yelling and barking. Riotous).
Catherine marries the upper-crust milquetoast Edgar (Johnson) and rejected, dejected Heathcliff goes off. Catherine goes fully off her rocker, talking to imaginary people with humorous names – and to walls.
Heathcliff later returns, wealthy (having earned his fortune from “fish-paste”) and winning the entire estate of Withering Heights (cue the ominous sound effect) from the drunken Hindley, who married a horsy woman named Frances (Schein, uproarious with buck horse-teeth and a whinnying laugh), who dies in childhood.
The baby grows up to be the loutish, uneducated Hareton (Schein, flaunting Hareton’s other attributes by wearing a codpiece that attracts cousins of both genders).
There are so many others. The servant Joseph, for instance (Schein, side-splitting with a pipe in his mouth and a cut-with-a-knife Yorkshire accent that no one can understand). There’s Isabella, Edgar’s sister (Schein), who is wed to Heathcliff, part of his plan for revenge on the lot of them. Isabella gives birth to Linton, a whiney, kvetchy nerd (Schein, very funny). She, of course, dies in childbirth.
Linton hankers after his cousin Hareton, but he winds up with Young Catherine (Johnson), daughter of our heroine, Catherine, and she also dies in childbirth. Sheesh… that was a dangerous undertaking.
Heathcliff takes his revenge on everyone, then goes to the graveyard to commune with Catherine’s spirit, as they call to each other across the moors and she brings him to her.
And there you have it. Mayhem, delirious mania, split-second character changes and two tour de force performances. Oh, and audible dyspepsia. And a fart. Can’t have a silly spoof without that.
David Ellenstein directs this inspired insanity, which excels more in the characterizations than the text itself.
The gray, moorish set was designed by Scott Amiotte. The costumes (Elisa Benzoni) are just right, minimal changes marking maximal character delineation. The sound effects (Melanie Chen) are terrific, and the lighting (Curtis Mueller) is highly effective (mirror ball and all). The lights for the graveyard scene are killer. And of course, everything turns blood-red with each death.
Even if this isn’t your cup of comedy, you’ve got to marvel at Schein’s insanely gifted malleability of face, voice, accent and gender, not to mention his agile physicality. And Johnson’s inherent wackiness and mastery of humor, anger and canine impersonation.
Off-the-wall? For sure. The guys, the play, the acting, the whole enchilada — wildly over-the-top. You’ll get a bellyful, for sure.