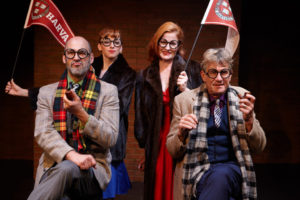 He’s ferociously smart (a Harvard-trained mathematician by trade; he was admitted at age 15). And deliciously cynical. And brilliant with language and word-play.

Too bad that Tom Lehrer stopped writing his wickedly hilarious songs in the 1970s. But his wonderful oeuvre is a lasting legacy, immortalized in a sprightly musical revue, “Tomfoolery,” adapted by Cameron Mackintosh and Robin Ray. The show premiered in London in 1980 and ran  Off Broadway the next year.

North Coast Repertory Theatre might be the only local theater devoted to the man and his music (he’s still alive in Northern California, at age 89). NCRT first produced “Tomfoolery” in 2005. Now it’s back, in a lively, funny production, under the witty direction of Kathy Brombacher, aided by clever moves from choreographer Jill Gorrie.
If you’re not familiar with the work of Tom Lehrer (classics like “Poisoning Pigeons in the Park,” “The Masochism Tango” or “The Vatican Rag”), this is a terrific introduction.

If, like me, you’re a long-time devotee, you’ll relish all the comical reminders. But try not to sing along (the guy next to me drove me nuts!). Just sit back and enjoy the genius of the lyrics, and the wily parodies of popular song forms (from folk to waltz).

During the brief, 10-day rehearsal period, the cast lost their musical director/accompanist (due to family illness), and Steve Withers stepped in on incredibly short notice. He’s fantastic, playing nonstop throughout the evening.

The cast is pretty impressive, too. Together, they’re a riot, and separately, they each have at least one stellar number: perky Sarah Errington with the lightning-paced “Elements” song (the entire periodic table set to the melody of Gilbert and Sullivan’s “Modern Major General”); lusty Christine Hewitt, a perfect red-haired colleen in “The Irish Ballad”; agile, droll Lance Arthur Smith with the seething paean to that hypocritical German bomb-maker, “Wernher von Braun”; and Andrew Barnicle with the STD/plague-ridden “I Got it from Agnes.”

There are many memorable moments, and you might be inspired to rush out and buy the Tom Lehrer box set. I hope so; his creations deserve long-lasting fame. But don’t wait to see “Tomfoolery”; this is a very short run (only two weeks). Hurry and get your tickets now. Do your political- and funny-bones a favor.