“THE WHO’S TOMMY” at the OB Theatre 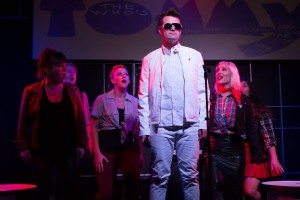 The Pinball Wizard is a musical theater wiz as well.

At the OB Playhouse, a musically outstanding rendition of “The Who’s Tommy” stars a wonderfully charismatic Jon White. But you’d better catch him fast; he’s off to Seattle come fall – to pursue a Master’s degree in Public Policy at U. Wash. Our loss. He’s outstanding  in the role – a strong-voiced, natural rocker.

All the voices in this production are strong – especially Meredith Russo as Cousin Kevin (go figure – but it works) and the Gypsy/Acid Queen; and the husband and wife duo – Christopher T. Miller and Keri Miller – playing Capt. and Mrs. Walker, Tommy’s parents. Owen Schmutz is noteworthy as young Tommy; he doesn’t get to sing much, but he has a perfect  zomboid blankness as the kid who’s traumatized by observing his father’s involvement in a murder through the mirror in his living room, and immediately becomes “deaf, dumb and blind.”

You may remember the story from The Who’s groundbreaking 1969 concept album, and the fabulous musical version of it that premiered at the La Jolla Playhouse in 1992 (with The Who guitarist extraordinaire Pete Townshend co-writing the book, as well as music and lyrics), and went on to win five Tony Awards on Broadway.

After suffering much medical prodding and poking, and some other kinds of poking from his nasty cousin Kevin and “wicked Uncle Ernie,” not to mention an aborted sojourn with the “Acid Queen,” Tommy is randomly placed before a table and becomes a Pinball Wizard, then a superstar and cult leader, then just a regular guy, liberated and enlightened. He eschews stardom (“Freedom tastes of normality,” he sings at the end, in a reprise of the high-spirited “I’m Free”), tells his disappointed followers not to try to emulate him, but to go live their own normal lives. At the end, he happily reunites with his (dastardly) family.

At the OB Playhouse, the six-piece band is fantastic (special kudos to the two guitarists: P.J. Bovee and Raynald Marte), but the hand mics used by the singers often can’t rise above the music, and that’s a shame, since both the playing and singing are so good (Musical direction by Kirk Valles).

The set (by producer Bill Connard) is simple; the metal light stanchions are effective, but the stacked electronics proved precarious the night I was there (young Owen nearly toppled off). The direction (Jennie Gray Connard) relies on a steady stream of era-defining projections (Jim Roth is credited with lighting design; no mention of projections in the program). Much of the action is static and there is minimal choreography. The costumes, which don’t vary much for the ensemble in the wide-ranging and clothes-changing span from 1943-1960, are not always period-appropriate or flattering.

But “Tommy” is all about the music, and that the OBP delivers in spades.