“THE ADDAMS FAMILY” at the Welk Resort Theatre 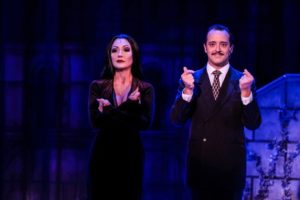 A marriage hinges on determining whose relatives are crazier. Oh, the would-be bride shooting an apple, blindfolded, off her beloved’s head — with a crossbow.

Welcome to “The Addams Family” musical.

You won’t leave the Welk Resort Theatre thinking deep thoughts. But you will have a helluva time.

The very funny production, inventively directed by Larry Raben and choreographed by Karl Warden, is a sheer delight.

The cast is top-notch, every character sharply, comically etched. The singing and dancing are excellent. Never have the dead ancestors played a more amusing role.

There are actually three couples experiencing relationship challenges — four if you count gender-neutral Uncle Fester and his love-object, The Moon. Five if you add young Pugsley, who’s losing his beloved torturing sister, Wednesday, as she stumbles off to marriage to — horror of horrors! — a normal person.

She confides in her father, who lies to her mother, which he’s never done before. At the awkward coming-together of the two wildly disparate clans (the other one’s from Ohio), Pugsley’s plot to drug his sister goes awry, and the normal parents turn out to be pretty quirky in their own right.

So, two husbands in the doghouse, a budding wedding in the balance, a tap-dancing Grim Reaper makes the scene, all coupled with fabulous makeup and costumes and tangos – what more could you want?

Well, how about newly-added references to swing-states and Greenland and home-schooling and whistleblowers?

There are lots of laughs here — in the book by Marshall Brickman and Rick Elice, and the catchy music and clever lyrics by Andrew Lippa, all derived from the original Charles Addams New Yorker cartoons and the popular finger-snapping mid-century TV show.

There’s a little tiny message about craziness being underrated, and the importance of living until you die. And this from people who relish death.

If you, too, have a mania for the macabre…. or upbeat/downbeat musical comedy, you’ll hotfoot it up to Escondido. Pronto.