“TELL ME ON A SUNDAY” at Broadway Vista Theatre 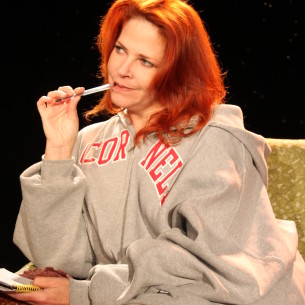 Looking for love in all the wrong places. Like New York. Or L.A.

Emma left her home in small-town North London to snag a man and a green card (in either order).

“Tell Me on a Sunday,” a one-act-one-woman, one-hour song cycle, is the first act of a 1979 collaboration between Andrew Lloyd Webber (music) and Don Black (lyrics). This was the ‘song’ part. The 1985 Broadway production featured Bernadette Peters.

Well, we have our own local musical star – Bets Malone, in the snappy production at Vista’s Broadway Theater, directed by another local musical theater luminary, James Vasquez.

Emma doesn’t have much ambition beyond man-snagging. We follow her through at least four ill-fated relationships – one of which, with an older, work-obsessed Hollywood sharpy, leads to an invitation to L.A., where she’s promptly abandoned. Another swain is too young; still another is married. And the one she’s breaking up with at the outset has been lying to her and seeing other women.

It’s not “The End of the World,” she sings several times, trying to buck herself up. The comical parts of this slight, virtually plot-free show come in her letters home to ‘Mum,’ and include some of Black’s sharpest lyrics. The best song title (though most of its Hollywood grievances are by now trite) is “Capped Teeth and Caesar Salad.”

The strongest ballads are “Unexpected Story” and “Come Back with the Same Look in Your Eyes.” Some of the content feels dated, but women will probably always pin their hopes on inappropriate men, so the basic premise may never go out of style.

Malone has a potent, appealing voice and a wonderful way with a song (as she proved so brilliantly in “Next to Normal” in 2014, at San Diego Musical Theatre). She skips nimbly through a gamut of emotions and quick-change looks and outfits – and she remains plucky to the end (“Dreams Never Run on Time”). Though the calendar pages keep turning, her hope is never-ending. Plus, now she’s got her green card. Perhaps she should shift her focus to acquiring some skills and pursuing a career. Maybe she’ll meet Mr. Right along the way.