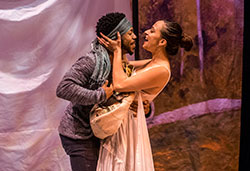 If you can say the title, you should certainly see the show. And even if you can’t, you should.

Yes, it’s got language. Plenty of it. Coarse and clever, exciting and insightful. It’s even got a little nudity. It’s smart, sassy, sexy – and deep, especially on the subjects of theater and love.

“Stupid Fucking Bird” captures all the angst of everyday existence, and in a brilliant way, it gets to the heart of one of Anton Chekhov’s masterworks, “The Seagull,” first produced in 1896. Playwright Aaron Posner takes Chekhov’s characters and themes and spins them into 21st century gold.

Almost every one of these flawed folks is drowning in unrequited love. The young, experimental playwright, Con, expounds on the state of the theater – with some of the same complaints Chekhov laid down 100 years ago. They all want, and need, and kvetch and whine, and they don’t do much to help themselves out of their various ruts. The absurdity of someone else’s life is hilarious. This play offers the mad, manic, catatonic, narcissistic insanity of existence, coupled with the reckless, restless irrationality of love. What makes it so amusing is that it’s so achingly familiar.

Rob Lutfy, Cygnet Theatre’s associate artistic director, has proven himself to be one of the best directors in town, particularly for tricky, challenging work. His production of “Bird” is dazzling. This is a virtuosic ensemble, with each individual performance a radiant gem, centered by the electrifying Ro Boddie as Con, flailing around like a wounded seagull himself, asking the audience for relationship advice, and fielding the responses with wildly clever ad-libs.

A gilt-framed portrait of Chekhov hangs over the proceedings. The old Russian would adore this production. He always thought his works were comedies, though they’re invariably staged with solemn reverence. None of that for Posner or Lutfy, who goose the humor, while never losing sight of the heartache.

The rotating set and pitch-perfect costumes, highlighted by the vivid sound and lighting, and the clever choreography, satisfy all the senses.

From the impudent opening to the enigmatic ending, this is a show for gutsy theaterlovers who’ll relish a delicious blend of the classic and the bitingly contemporary.