PREVIEW: Stepping Out Onto “Golda’s Balcony” 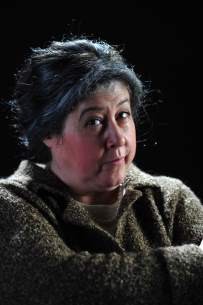 She may have looked like a Yiddishe Mama, but she was a tough-as-nails leader and the indomitable Mother of a nation. That would be Golda Meir and the State of Israel.

Golda’s story is expansive and impressive, and a small part of it is depicted in the 2003 stage-play, “Golda’s Balcony,” by William Gibson.

Golda was born in 1898 in Kiev, Ukraine, the daughter of a poor carpenter. She never forgot the terrifying door-to-door searches of the Cossacks, or the pogrom that nearly devastated her family.

After living in poverty for years, her father left for the “golden land” of America, and ultimately brought his family to Milwaukee. Golda’s older sister, Sheyna, moved to Denver, and when their parents did’t think Golda should continue her education, but should work to bring in money, she left home and went to live with her sister.

Sheyna’s house was filled with Jewish intellectuals, endlessly discussing political and social issues. It was there that Golda met Morris Meyerson, a soft-spoken man with a love of art, poetry, literature and music –   passions he introduced to Golda.

Reconciled with her parents, Golda returned to Milwaukee, and became a schoolteacher. Her parents were very active in the Jewish community, and during World War I, their house was a meeting-place for young Zionists. When she learned about the Jewish Legion, which was fighting against the Turkish regime, Golda tried to enlist, but girls weren’t accepted.

Toward the end of WWI, Golda and Morris were married. Golda began her long association with the Zionist movement, traveling the country, spreading Zionist ideals. This was the choice she always made: the Jewish homeland over her personal home-life.   Ultimately, it would destroy her marriage.

In 1920, she and Morris moved to Palestine and had two children: Menachem and Sarah. But Golda felt imprisoned by housework and intellectual stagnation.

She accepted a traveling job for the Histadrut, the national labor union. By 1928, she and Morris were separated; they divorced ten years later.

In 1948, when the Jewish state was declared. Golda Meir was one of 24 signers of Israel’s declaration of independence. But immediately afterward, the war of independence began. Golda was sent to the U.S. to raise money for the war effort, and she was highly successful.

In 1967, at age 69, Golda decided it was time to retire from her long life in public office (Minister of Labor, Foreign Minister). Soon after, Prime Minister Levi Eschol suffered a heart attack and died. Golda was pulled out of retirement and elected the fourth Prime Minister of Israel. On Yom Kippur 1973, Egypt and Syria attacked Israel and war ensued.

Golda’s fraught interactions and gut-wrenching decisions at that time –   with Israeli and American leaders – form the dramatic crux of Gibson’s play.

The Play, The Life Challenges

The title, “Golda’s Balcony,” refers to an observation area inside the secret Dimona nuclear weapons facility .

“I thought it was incredible,” says Kholos, a California native and former San Diego resident who now lives in Nashville.

“I thought, ‘I’d like to license that show and present it.’ My concept was different from what Tovah – and later, Valerie Harper [who starred in the 2006 film] –   were doing. I wanted to bring it to smaller venues and communities, and into synagogues and JCCs.”

Kholos found his Golda in Francine Berk, a Nashville actor whom he cast in his own creation, the musical “A Stoop on Orchard Street,” which focused on the   early 20th century Jewish immigrant experience in New York. He produced the show in Nashville (which has a Jewish population of 7500), Philadelphia and New York.

“Francine is one of the most – perhaps the most – talented people I’ve ever worked with,” says Kholos, who spent the ‘60s working for “The Dick Van Dyke Show,” “The Red Skelton Show” and “The Jack Benny Show.”

“She absolutely channels Golda Meir. Audiences were captivated. And it’s not easy keeping 600 Jews from talking or moving for 90 minutes. We’re not the easiest audience!”

Kholos is willing to challenge the Jewish audiences of San Diego and Palm Springs. He’s anxious to return to San Diego where, in the late 1970s, he and his former wife were founders of Temple Solel.

Solel is his North County venue. The others are Congregation Beth Israel in La Jolla and Temple Emanu-El in La Mesa. There’s a free matinee at Seacrest Village, for residents only.

“I wanted to make this wonderful show available to people who can’t get out, or can’t afford to go to the theater,” says Kholos. “Seacrest has also invited 22 Holocaust survivors to their performance.”

Kholos travels with four crew members, who provide lighting, sets and “a very professional look” to the production.   He plans to tour the show, which will continue in Florida, and hopefully, up to 50 other cities. But, he says, it’s hard to secure the rights to the piece, since Feldshuh holds the reins, and still likes to perform the role on occasion. That’s why Kholos requests smaller cities and venues.

Although Golda Meir was formidable, Kholos remembers that she reminded him of his grandmother.

“I saw her as a Bubby – but she never was. Her strength, her power, and the story of how she went against convention are inspiring. She was incredible, way ahead of her time as a woman. And she would risk everything for Israel.”

So, how does a Nice Jewish Girl from Brooklyn embody this Russian/Milwaukee/Israeli powerhouse?

Francine Berk (née Yurkowitz) feels “a kinship” with Golda. “My Grandma Fay was from Kiev, like Golda,” she says. “She had stories to mirror the horrors Golda observed. Then she came to the U.S. and became a successful businesswoman.”

Francine (who’s being marketed in this show as ‘Francine!’) grew up in Port Washington, Long Island, the eldest of three girls. Her father was a salesman in the “schmatta” business; her mother was a homemaker (“a balabuster, as she put it”). And her uncle, whose father was a Torah scribe, was the rabbi at the Community Synagogue in Sands Point, where she attended Hebrew School, and was bat mitzvahed and confirmed. Later, she would briefly live on a kibbutz in Israel.

There was a time when Francine, always a talented singer, considered becoming a cantor. But theater was always her true passion. She made her stage debut at age 9, as Dorothy in “The Wizard of Oz.” At 14, she was evaluated and recommended for the Pre-College Division of the Juilliard School. But her mother, recommending a more ‘practical’ career, wouldn’t let her attend.

Recalling that “the woman at Juilliard told my parents I could be the next Beverly Sills,” Francine admits that she “resented that decision for years. My mother always said, ‘We’re simple people. What do we know from show business?’ Her relatives had been musicians in Russia, but they weren’t considered ‘sensible.’”

Her mother recently admitted that the Juilliard decision was probably the biggest mistake she ever made. Yet when it came time for college, Francine’s mother still wouldn’t allow her to study theater. Since her father wanted her to be a lawyer, she earned a B.A. in political science at the State University of New York at Binghamton, but in her spare time, she worked as a singing waitress in a jazz bar, and performed in musical theater, winning awards along the way.

She actively pursued a country singing career; a major Nashville producer, smitten by a song she’d written, called her “the Bette Midler of Country.” She moved to Nashville to cut an album, but the producer died unexpectedly, “and my song went with him.”

Still, Francine says optimistically, “everything has its bashert [destiny] element.”

“I’m absolutely dedicated to the piece,” she says. “I’ve read and re-read Golda’s biography. I bought a copy of the speeches she gave – in Yiddish, Hebrew and English. I studied how she expressed herself. She was so brilliant, so eloquent.

“I’ve worked to achieve an amalgamation of Yiddish, which she used at home, even in Milwaukee, crossed with a Midwest and a Hebrew accent.”

Francine sees Golda as “a working mother long before that was fashionable. And she was working on Big Issues. She called it a ‘duality’ in her life: her Cause vs. her Family.”

As for the issue of war in the play, to Francine, Golda “clearly suffered torment and heartache. We can never know if she would ever have pushed the button. And I thank God that we never had to find out. But she did say, ‘I cannot in good conscience ever again allow my people to be extinguished. If I can prevent another Holocaust, I will.’

“She had to confront the painful question: ‘Do I have the right to destroy another people to preserve my people?’ It’s a calamitous decision, an achingly brutal situation.”

“It’s amazing that William Gibson was able to embody this whole lifetime in just 64 pages,” says Francine. He presents less a historical figure than a real person who lived a relatable life.

“My biggest fear in taking on this role,” Francine continues, “is: I don’t want to insult her soul. I keep going back to the clips, to see her eyes, study her moves. She was very contemplative, very meticulous in her thinking. Before she spoke, her eyes became thoughtful. She knew how easy it was to fuel a fire. She weighed and measured every word. You could see she was considering all sides.

“I want to be sure I’m representing her fairly. I’d like to think that, if Golda were here, she’d say:   ‘How did you know me?’ And I want the audience to feel like they just met Golda Meir.’