FEATURE: San Diego Theaters Preparing for When Audiences will be Ready to Come Back 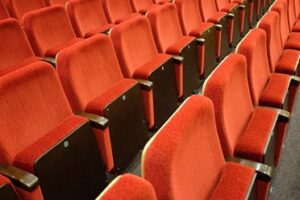 The Big Question on everybody’s mind these days is: When will life return to ‘normal?’ And what will this new ‘Normal’ look like?

The vibrant San Diego theater community has come together for meetings (virtual, of course) to figure out a joint plan for theaters to dip their toes in the Comeback Creek.

“He was just saying, ‘Hey! How are you doing?,” says Jennifer Eve Thorn, artistic director of Moxie Theatre. “He was asking ‘How are you doing with canceled productions. He was looking for connection, shared ideas.”

Thorn loved the idea of everyone having a unified plan for going forward, “a way to come together, leverage media attention and offer unified language.”

She came up with a slogan: “One Theatre. One Story.” Everyone else loved the idea and jumped right on it.

“I was surprised,” says Thorn. “I just threw it out there. But the response was excellent.”

The details of the Master Plans (such as they are in these tenuous times), the language for media to use, the ideas for advocacy at the city and state levels, the t-shirts being created for each theater to sell, will all be spelled out in a media release later this week. The Survey sub-group will determine how audiences are feeling, and what would make them ready to venture back into a playhouse for a live theater experience.

“I just felt that everyone was working on their own, and I wasn’t getting a sense that anyone knew what anybody else was doing,” says Murray. “It looked like, as schedules started to come out, shows might be happening at the same time, which would put strain on actors, musicians, designers and technicians, who might have overlapping commitments to different theaters and shows. At Cygnet, we were taking Broadway theaters as our guide. At first, they said they’d re-open April 13. Then it was June 7. Now, I think they’re saying nothing. No one knows.

“I just thought I’d start an email chain to see if there was anything anyone wanted to share. I tried to include the large, medium sized and small theaters, too. We’re all just trying to make it. And I thought the small companies might benefit from the larger theaters’ ideas.

“I think that, with this joint effort, and slogan,” Murray continues, “ we’re saying to everyone in San Diego, ‘As a group, we contribute an enormous amount to the economy’ — when you take into account restaurants people go to before and after theater, etc. I thought it would be great to speak to the larger community with a unified voice.”

They’re gleaning information from many sources for determining when audiences will be ready, including a Washington D.C. poll, and a national strategy initiative in the works from Slover Linnett Audience Research and La Placa Cohen, supported by The Wallace Foundation.

Tony Award-winning Broadway producer Ken Davenport (“Kinky Boots,” “Once on This Island,” “The Play That Goes Wrong”) recently used his website (theproducersperspective.com) to ask the musical question: “What Can We Do To Make Our Theatergoers More ‘Comfortable’ post COVID-19?”

He was positing ten ideas (he admitted that “no idea was too crazy”), but looking for suggestions from readers.

A few he came up with: Hand sanitizer both backstage and front-of-house; Temperature checks of all patrons; branded masks distributed to theatergoers on the way in (one of the “crazy ones,” he thought); no physical tickets/ electronic only, so no ticket pickup; “at-risk” social distanced performances, with certain performances designed specifically for at-risk audiences, with only 30-50% of the house being sold for social distancing.

Results suggested that, regardless of venue size, only about 1 in 3 theatergoers (31%) said they were ‘very likely’ to return immediately when theaters reopen, while about 1 in 5 (21%) are ‘very unlikely’ to return immediately. Approximately half (49%) suggested that they will probably wait at least a few months or more before returning, while only a quarter (25%) think they will attend right away if there is something they want to see. Interestingly, those in the most vulnerable age demographic for the virus (65 years and older) were not any less likely to return immediately than those under 65.

Overall, the results suggested that theaters will likely see a net audience decline from previous, pre-pandemic seasons. More theatergoers said they would attend the theater less often than before (27%). It was health concerns rather than financial ones that most gave them pause.

What would notably increase interest in returning is if a vaccine existed (67%) which is, of course, beyond the control of theaters. The study found that the most important things theaters could do to get their customers back more quickly are: cleaning and disinfecting before each performance (auditorium, café, restrooms) (56%); and implementing some or all of the following (all mentioned by over 1 in 3 respondents): having hand sanitizers available throughout the theater (43%), if every other seat was left empty for social distancing (43%), and having face masks available (35%). All these ideas coincide with those suggested by Broadway producer Davenport.

The D.C. study conclusions, while statistically reliable, were all tentative, since the coronavirus situation remains fluid, and audience feelings are likely to alter correspondingly.

‘Tentative’ is the operative word here in San Diego.

Most productions, through most of the summer, have been jettisoned. Some have been canceled; others will be reinstated or pushed back in the season.

Theaters such as the OB Playhouse, Scripps Ranch Theatre and Oceanside Theatre Company have postponed their productions indefinitely.

Working from the available medical/social evidence, many local theaters, including The Old Globe and La Jolla Playhouse, have proceeded to announce a tentative season (i.e., a list of plays/productions), but no firm dates. Both theaters have maintained a very active digital presence during the quarantine, with offerings of many different sorts

La Jolla Playhouse has just announced a new digital version of its wildly popular site-specific, immersive Without Walls (WOW) Festival, which will launch in May, and will include a commissioned creation from Blindspot Collective, its 2020-2021 Resident Theatre Company.

Some theaters are forging ahead, announcing seasons and dates.

The San Diego Repertory Theatre’s full season begins with “She the People,” from the renowned comedy company, The Second City (September 9-27), to be followed by Aaron Posner’s “JQA,” about John Quincy Adams (10/8-11/1). The postponed spring production of “Hershey Felder, A Paris Love Story,” will be presented in November (11/5-29).

**Lamb’s Players Theatre, according to producing artistic director Robert Smyth, is “moving into Plan E.” They are hoping to re-start the musical, “Alice” (which closed prematurely), on August 28, and Lamb’s Cabaret is scheduled to happen on August 30. Acknowledging that this is “optimistic,” Smyth says the company is “working with a ‘rolling calendar,’ and will go into Plan F when necessary.” Meanwhile, they’ve moved the re-boot of “Million Dollar Quartet” to 2021.

San Diego Musical Theatre has its pre-professional youth production of “42nd Street” scheduled for August 21-30, with its first full adult musical, “Little Shop of Horrors,” opening October 2 (through 11/ 1). The suspended productions of “Rent” and “Catch Me If You Can” have been added to their already-planned 2021 show season.

The Coronado Playhouse postponed its production of “Moon Over Buffalo,” which is now scheduled to open June 5.

Moxie Theatre is hedging its bets. For the company’s “Sweet 16” season, having canceled its May-June production of “Shiv,” Jen Thorn is currently auditioning actors, but asking them to commit to three different sets of dates. The theater is offering their “diehard fans” a 4-play subscription, given a willingness to donate one of those tickets back to the company if there’s another COVID stay-at-home order.

Cygnet is hoping to reinstate “La Cage aux Folles,” which closed after its first preview in March, producing the “practically turnkey” show in late August or early September, but nothing is definite at present. Murray is planning to push back all Cygnet’s scheduled productions, so none has to be canceled completely.

North Coast plans to produce an online reading of their canceled spring production of “Human Error,” union permission pending. The rest of the season remains up in the air, but it will include “A Streetcar Named Desire,” with local favorite Richard Baird playing Stanley Kowalski.

Moonlight Stage Productions canceled its first two summer productions (“An American in Paris” and “Something Rotten”), but is waiting to decide how to proceed with the rest of the season.

Diversionary Theatre is proceeding cautiously, watching how things evolve, according to managing director Jenny Case, who says they are continuing to “re-evaluate our program relative to the new world — logistically, financially and artistically.”

That ‘new world” continues to bedevil theaters in San Diego and around the country (and, presumably, around the planet). The ‘One Theatre. One Story’ survey will be helpful to all in taking the temperature of local audiences (so to speak) and getting a sense of what they’re willing to do and when.

As local actor Gerilyn Brault has told her students at Mira Costa College, and reminded us on Facebook, “After the Plague came the Renaissance. After World War II came the Golden Age of musical theater. We are in the midst of a defining moment in world history, and history has proven that the arts always come back.”