“RICHARD II” at The Old Globe 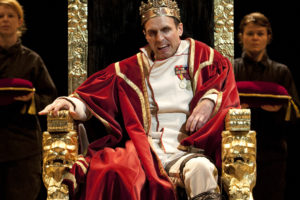 For 20 years in the 14th century, Richard II was King of England. He assumed the throne at age 10.

Shakespeare’s “King Richard II” covers only the last two eventful years of his life, when he was losing his grip, both mentally and politically.
He was thought to be a petulant, impulsive, vindictive narcissist, who surrounded himself with sycophants and yes-men. In his opulent domain, he richly rewarded unswerving loyalty.
Any resemblance to people living or dead is purely coincidental.
At The Old Globe, in what looks like an attractively walled but austere court, this Richard, played by Robert Sean Leonard, never really appears particularly weak, indecisive or unstable. There’s a regal bearing to him from the beginning, which diminishes his character’s arc and downfall.
Richard was only 33 when he died. Many have viewed the play as a coming-of-age story for a self-centered boy-man.
There’s little of that here, though Leonard is at his best near the end when, stripped of everything, his Richard finally has to look at himself honestly and come to terms with who he is and who he’s been. This is a potent moment in the production.
The stiff formality of Tory Kittles as Richard’s chief rival, his cousin and successor, Henry Bolinbroke, also doesn’t allow for a definite character arc. He’s something of a cipher.
Although director Erica Schmidt creates some beautiful stage pictures, a lack of clearly defined characterizations runs through the cast, many of whom are quite experienced players. The relevance to today’s political climate is not underscored. That’s for the audience to surmise on its own.
This is one of only four Shakespeare plays written entirely in verse. The language, rife with metaphor and memorable phrases, is handled quite well throughout. The costumes, sound and lighting are uniformly excellent.
There’s muscle to the production, but there isn’t a strong enough point of view, no statement being made, especially in the contrast between the outgoing and the usurping kings.
This weakens the production which, while quite attractive, feels somewhat unsatisfying.