“RED VELVET” at The Old Globe 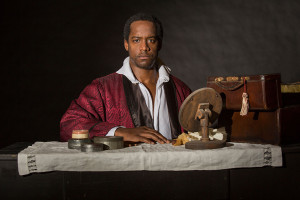 Red Velvet conjures images of rich cake or plush curtains. Something soft and smooth. But Lolita Chakrabarti’s 2012 play of that name is rough and angular.

“Red Velvet” is based in historical fact. It tells of two seminal episodes in the life of Ira Aldridge, the great 19th century African American actor.

The drama, a memory play (Aldridge is telling his story to an assertive young female Polish journalist), is bookended by scenes set in 1867, near the end of the thespian’s life. The mid-section takes place some 30 years earlier, in 1833.

It was then that Aldridge was making his most important stage performance – at the Theatre Royal at London’s Covent Garden, where a single performance could make or break an actor’s reputation.

The most acclaimed actor of the day, Edmund Kean, had collapsed onstage (never to recover), and the company manager, Pierre Laporte (Sean Dugan, with a wavering French accent) calls in his old friend, Aldridge, to step into the role of Othello.

The Moor had never been played by a black man before. At the time, England was dealing with street riots linked to the imminent passage of the Slavery Abolition Act.

Not just the critics were appalled by the theatrical substitution. Aldridge’s hidebound fellow players were also aghast at the untoward intrusion. Most vociferous were Kean’s son Charles (John Lavelle, way over the top), a decidedly mediocre actor, and the traditionalist Bernard Warde (Mark Pinter, quite effective).

But Aldridge’s Desdemona, the celebrated Ellen Tree (wonderful, credible Allison Mack) is intrigued by the acting approach of this brash American. She finds his naturalism thrilling, a stark contrast to the overly mannered “teapot” style of the day (so named for its typically stiff, posed, arms-akimbo stance).

There’s a hint of more than stylistic sharing between the two leads, but this isn’t sufficiently explored, nor, apparently, confirmed by history. It seems to be conjecture on the part of the playwright, for whom this was a first-time theatrical effort.

There’s plenty of historical information dispensed, in the guise of dialogue, to offset the speculation: discussions not only of the purpose of theater and the merits of various styles of acting, but also debates about racism, sexism and classism. All this is capped off with a dramatic consideration of the struggle between art and commerce, as Laporte informs Aldridge that he’s closing the show after just two performances. These issues remain (sadly) timely, and some of the discourse is anachronistically contemporary.

It should be noted that Aldridge went on to achieve great success touring Europe, and was especially beloved in Poland, where the first and last scenes take place.  He was only 60 when he died in 1867, but according to this drama, he never got over that London humiliation.

“Geography is irrelevant,” he asserts. “It is reputation that endures.”

Though Aldridge is by no means a household name, his reputation is kept alive in San Diego by a small, spirited theater company, the Ira Aldridge Repertory Players, founded and helmed by Calvin Manson.

In his haughty over-confidence, Aldridge, like Othello and other tragic figures, seems to have contributed to his own disgrace/downfall.

It’s a fascinating story, but the play has structural and linguistic weaknesses that dilute the effect. Still, most of the performances are compelling, including local actors Pinter and Monique Gaffney, as the Haitian servant who has a brief but seminal confrontation with Aldridge.

Albert Jones is a forceful presence as Aldridge, and he boasts formidable Shakespearean experience. The protean Amelia Pedlow (last seen at The Globe a year ago in the clever/silly verse comedy, “The Metromaniacs”)  is often amusing in three disparate roles.

Director Stafford Arima (who helmed “Allegiance” at The Globe and on Broadway), with little motivation or consistency, has some players watching the proceedings, sitting off to the sides of Jason Sherwood’s attractive, imaginative backstage/onstage set, with its revolving proscenium arch and striking upstage vertical lines of cables and ropes. The costumes (David Israel Reynoso) are eye-catching, and the sound (Jonathan Deans) and lighting (Jason Lyons) highlight the action, which often takes place behind old-style footlights.

Though the title may not be the most evocative link to the story, the history and relevance of the piece are sure to intrigue.