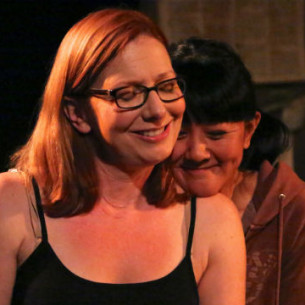 Brodie is a lover of language – but she’s not such a great communicator. She’s a professional, professorial linguist, who’s having a clandestine affair with one of her (much younger) female grad students.

Now, at age 42, with the help of an anonymous donor, she’s 12 weeks pregnant and about to undergo amniocentesis.

For a self-professed straight-talking scientist, she has trouble interacting with almost everyone: her genetic counselors, her lover, and the daughter of her primary research subject, one of the last speakers of a dying language.

New York-based playwright Madeleine George’s 2009 creation, “Precious Little,” is all about language, and its power to clarify, distance, elucidate, obfuscate or communicate. Language, Brodie didactically explains, helps us “understand cognition, consciousness, and what human beings are.”

She’s not the most likable or sympathetic character in the piece, which was named by the Pittsburgh Post-Gazette as one of the 10 Best Plays of 2011, but her life dilemma is provocative.

When she finds out that her fetus has a chromosomal abnormality (Partial Trisomy 9 with Mosaicism, to be precise), which could result in congenital problems ranging “from totally negligible to totally severe,” her worst fear is “retardation,” and the possibility that her baby will be unable to speak.

“I imagine a small, inquisitive companion,” she admits. “A miniature graduate student.” Those wild motherhood fantasies are fading fast, and Brodie has to decide what to do.

Her girlfriend doesn’t share her distress, and feels excluded from the whole process. The genetic counselors are shockingly unsupportive. Brodie only finds solace and direction when visiting a gorilla in the nearby zoo – a retired, language-learning research ape who seems to recognize Brodie’s pregnancy and feel her pain.

Memories of extreme pain, as well as fleeting moments of pleasure, emerge from an older woman, the research subject whose reading of words in her vanishing native language triggers all sorts of recollections and behaviors that scramble her brain and alarm her daughter.

Clearly, there’s a good deal going on in the mind of the playwright. She doles it out in brief scenes without much explication; the audience has to remain alert, and piece together the relationships together, and do it all in 80 efficient minutes. It’s quite a feat for playwright, director, designers and the three actors who play all the roles.

Under Nell’s direction, the actors do a remarkable job in this San Diego premiere:  Jennie Olson Six as the difficult, cantankerous Brodie, whose well-fortified intellectual walls of self-protection are crumbling around her; Jyl Kaneshiro as a multitude of characters (resentful grad student, inept genetic counselor, and numerous zoogoers); and Kathi Copeland, who gives a masterful performance as the gorilla (her narrow, wise, searching eyes and slow, methodical moves are mesmerizing), and a more experienced (but not particularly compassionate) genetic counselor; as well as the linguistic informant, whose (playwright-invented) language and memories are stunningly evoked.

The simple set (Shaun Tuazon-Martin) features large boards covered in tacked-up research notes, papers, sketches and photos, overlain with paintings of trees and leaves (deftly doubling as offices and the zoo enclosure). Chad Oakley’s lighting is striking in the zoo scenes, and in providing a sense of liquidity during the amniocentesis.

Both play and production are riveting. There are so many issues to ponder, so many moments to revisit and re-analyze. “Precious Little” says a lot – about communication, and the ambitions of InnerMission Productions.

The InnerMission production of “PRECIOUS LITTLE” runs through November 21 in the new Black Box at Diversionary Theatre, 4545 Park Blvd. in University Heights