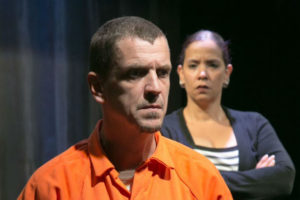 But Robert Schenkkan, Pulitzer Prize and Tony Award-winning playwright/screenwriter (“The Kentucky Cycle,” “All the Way,” as well as the film “Hacksaw Ridge”), was so agitated by the 2016 election that he wrote a play in what he called a “week-long white-hot fury.” And impressively, a tiny local theater, Point Loma Playhouse, is the first in town to produce the piece.

“Building the Wall” is set in 2019. There’s an all-out war on immigrants. Martial law has been declared, and multiple civil rights have been taken away.

But now, the President has been “exiled to Palm Beach.” And we find ourselves in a prison, where solitary-confined inmate Rick is being interviewed by Gloria, a college professor who wants to allow him to tell his side, in his own words (she’s also gunning for a book deal).

She’s black; he’s a Trump-loving Texan. Though Trump’s name is never mentioned, video images of his angry calls for The Wall precede the proceedings.

There isn’t much dramatic tension between the two. In fact, Rick’s story of why he’s incarcerated is harrowing enough to be a monologue, delivered to the audience as if we were the interlocutor.

We hear about his evolution from apolitical blue-collar boy who left school and home at age 16, then joined the Army after 9/11 (seeing it as his patriotic duty) to murderer. Gloria’s story about her brother’s death in Iraq and her resulting descent into anger and alcohol gives a commonality to these two disparate people (divided by race, class, education and socio-economic status), but it doesn’t add much dramatically.

Rick liked the “order, organization, structure and clean lines of authority” in the military. He rose to the rank of sergeant, but left after Saddam Hussein was captured (“Mission Accomplished,” he says). As a civilian, he started out in law enforcement and migrated into prison security for a large private detention facility.

He saw “the country going down the toilet” under Obama. Then, he happened to catch one of the Presidential debates in 2016, and found Trump to be “very entertaining.” When he attended a rally in El Paso he “felt comfortable” with people who looked just like him; he “didn’t feel little, put down or shamed.” He began to handle security for the candidate.

He reports that Trump checked the sound and lighting before each rally; “he pays that kind of attention to detail.” He feels strongly that the country should protect its borders. “People shouldn’t be allowed to come and take our jobs and services,” he says, while asserting repeatedly that he’s not prejudiced.

He moves up the ranks in security. When immigrant “roundups” ramp up, he finds himself and his facility over-populated and overwhelmed.

As the story unspools, piece by horrific piece, over the course of 80 minutes, it builds to a series of ghastly revelations.

In a stark setting (designed, along with the lighting, by D Martin Bookwalter), just a metal table and two chairs, director Jerry Pilato encourages a civil politeness in the interactions, but he effectively ratchets up the tension.

As Gloria, Lucinda Moaney maintains a calm, academic/journalistic objectivity, but you can tell that she’s repulsed and seething just below the surface.

Joe Paulson’s chilling, vacant-stare Rick tells his terrible tale with dispassion, but it’s obvious that one wrong button pushed and he’ll erupt emotionally, possibly violently. Paulson gives Rick a bit of humanity (he weeps when he thinks of his now-estranged wife and daughter). He uses his responsibility to his family to explain why he stayed on the job, despite needing to throw up when he first witnessed exactly what he had put in place. He displays no sense of responsibility or compassion for his charges. Plus, there were “productivity incentives.”

Here, as in that other hate-inspired “Final Solution” to a destressing problem (the specter of Hitler looms as large in the mind as that of the president), efficiency trumps humanity.