“OUTSIDE MULLINGAR” at Scripps Ranch Theatre 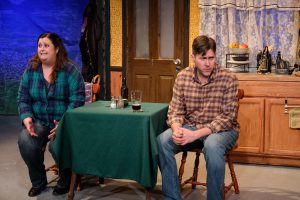 There’s something touching and fulfilling about watching a reluctant lover come around and a lopsided love re-balance.

In the rural Irish countryside (2010-2015), Anthony (Stephen Schmitz) doesn’t have a clue that love is in the air. He’s too busy keeping his head in the clouds and ducking away from interpersonal contact altogether.

Rosemary (Vanessa Dinning), whose family owns the adjacent farm, can’t think of anything but connection and commitment. Ever since they were kids and he threw her down on the ground, she’s marked the spot and marked him – for her. It’s a rough road, since he had his heart broken years ago, and has been thoroughly shut down ever since. Plus, he is a bit… strange, as everyone keeps saying, including Anthony himself.

It doesn’t help that his crusty, cynical father, Tony (Jim Chovick) is constantly demeaning and undermining him. No wonder Anthony can’t take a step forward and is rooted in place.

Rosemary’s newly widowed, life-weary mother (Dagmar Fields), like Tony, is facing the end of her road. She tries to intervene when Tony vows to pass along the beloved land to a cousin in America, instead of to his only son.

But it takes the indomitable, tough-as-nails but still sanguine Rosemary to make things happen and make things right. She does battle with Tony on Anthony’s behalf, and she does everything but stand on her head to get Anthony to notice her. It takes years. Half a lifetime, in fact.

These two are no youngeters; they’re both facing middle age, with nothing to show for it and not much to look forward to. But when they finally come together, the audience gives a collective sigh of relief and satisfaction. It is a long time coming, though. The first act is a bit of a slog, but the second act makes it all worthwhile.

Playwright/screenwriter John Patrick Shanley is probably best known for his 1987 film, “Moonstruck,” another slightly off-kilter romance. Clearly, he knows how to pull on the heartstrings; here, he yanks them.

We get Irish blarney and obstinacy, faith and superstition, failing health and fading dreams. And we get a final scene of such tenderness, such timid aching to bond and join, that it’s deeply affecting.

Under the direction of Kathy Brombacher, the most emotional moments are the best: the angry ones, the remorseful ones and the tentative romantic ones. And that deathbed (uncharacteristic) reconciliation between father and son.

The accents are variable throughout the otherwise effective cast. Schmitz, whose Anthony is so poignantly stalled, has the most pronounced and authentic-sounding brogue. Dinning’s is milder and more uneven, but still convincing. The final scene between them is a heartbreaker and tear-jerker.

If you’re looking for a unique date-night this Valentine’s month, try taking a trip to Ireland… via Scripps Ranch or Oceanside.