“OUR GREAT TCHAIKOVSKY” at the San Diego Repertory Theatre 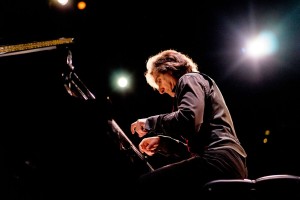 Everyone likes to get a peek behind the scenes. In “Our Great Tchaikovsky,” Hershey Felder offers a glimpse into how he does what he does: create multi-faceted musical biographies that capture the essence of composers like Beethoven, Chopin, Gershwin and Bernstein.

First, he tells us, in his latest, uncharacteristically personal piece, he picks a piece of seminal, representative music. Then, he delves deeply into the biographical background. Then he envisions an evocative location. Next, he defines simple character traits that will drive his portrayal. What happens when he puts all those elements together is sheer stage magic. Felder is an accomplished actor, writer, pianist – and in this production, even the scenic designer.

This world premiere, “Our Great Tchaikovsky,” tells of the triumphs and challenges of the great Russian composer Pyotr Ilyich  Tchaikovsky (1840-1893), who went through hard times of anguish, rejection and isolation before becoming one of the most popular and most beloved composers in the world.

But Felder goes one step further. He gets conspiratorial, drawing the audience directly into the piece by reading us a letter he received from the Theatrical Producers Organization of Russia, asking him to bring “our great national composer home to us” – by performing this play in Moscow.

Given what we’re about to learn about the great but tortured composer, Felder asks us to help him decide how he should respond to the letter – and whether accepting the invitation will actually endanger his life.

He drops that on us, then goes on the inhabit Tchaikovsky – and those around him – paying particular attention to the composer’s homosexuality, and how it impacted his life time and time again.

Felder moves in and out of the piece, easily transitioning from Tchaikovsky and his contemporaries – family, friends and mentors – to assuming his own voice and serving as narrator/commentator, filling in historical details.

The play, written by Felder and deftly directed by Trevor Hay, is cleverly constructed. The epistolary challenge – and the unsolved mystery of the man and his sudden death – keep us engaged throughout. But so, of course, does Felder’s masterful performance.

Not only does e dramatize the tormented and acclaimed life of the composer, he treats us to virtuosic piano renditions of many of Tchaikovsky’s most famous, iconic works, from the love theme from “Romeo and Juliet” to segments of the ballets, “Swan Lake,” “Sleeping Beauty” and “The Nutcracker,” to the piano concertos, and parts of the opera “Eugene Onegin,” the driving, pounding “1812 Overture” and the enigmatic Symphony No. 6 (the “Pathétique”), which was his last public appearance. Nine days after robustly conducting the work, at age 53, he was dead, and how exactly that happened has never been resolved. Felder presents the many conjectures, and posits one of his own, in a shocking final moment that also relates to his own dilemma regarding the maestro.

There is more music performance in this piece than in the rest of Felder’s composer “sonata.” He plays more complete compositions. And his piano-playing is dazzling, ranging widely from the loud bombast of the “1812” (he himself called it “a whole lot of noise,” composed in one week) to the light, gentle stylings of “The Nutcracker” and the heartbreaking Pathétique.

We feel the lushness and the romanticism of the music, which is heightened by our learning of the events and emotions that underlay them.

Felder’s scenic design is spare but beautifully suggestive – the stately, delicate birch trees of his native land upstage; a desk, a chair, a clothing rack, and in the center of it all, a commanding concert grand. There’s a suspended picture frame that shows us the man himself, his beloved mother and other important figures in his life. Behind it all are magnificent projections (Christopher Ash), presented in shadow, evocations of dancers or cities or stunning snowfalls. The lighting (Ash again) is subtle and superb, and the sound (Erik Carstensen) is crisp and clear.

What we come to know is that the composer’s sexual proclivities were not only incendiary during his lifetime. As recently as 2013, Russian President Vladimir Putin declared “war on homosexuals,” as the New York Times put it. That same year, the Ministry of Culture announced that there was no evidence whatsoever that Tchaikovsky was homosexual (despite extensive data to the contrary). Anti-gay violence continues in Putin’s Russia.

All this intensifies the mystery of the story’s end and the risk of responding to the letter that introduces it. At the end, Felder returns to asking our opinion. But he’s already made up his mind. You’ll have to see this marvelous production to find out what he decided.