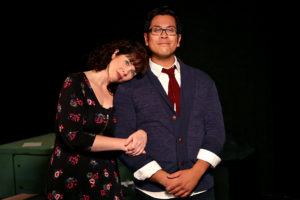 According to Adam Gwon’s “Ordinary Days,” everyone should have a Big Picture in mind. It’s broader and deeper than a Master Plan. It might include the full scope of where and who you are, or will be, in X-number of years – or beyond.
In the 2012 chamber musical, four characters, adrift in Manhattan, are feeling swallowed up in the melee.
Among the 20-somethings, one is looking for art, one for intellectual fulfillment. In the 30-something couple, one is searching for true love, and the other is running away from it.
Reluctant Claire and romantic Jason just moved in together. But she’s not making space for him in her apartment — or her heart.
Cynical, unfocused Deb is at an impasse in her graduate thesis – and then she loses all her research notes. Optimistic Warren, who’s cat-sitting for an artist, though he really wants to be one, finds Deb’s papers. He’s gay, but he still thinks the meetup and exchange, strategically arranged at the Metropolitan Museum of Art, will lead to a deep and lasting friendship. He turns out to be right.
In the end, they’re all freed from their current obstacles and, thanks to paintings at the Met, they all learn to see a little better – the way out of the past, or the beauty of the simple things in life.
Though the sung-through piece feels a bit precious at times, the questions it raises are certainly relatable. We’ve all been disappointed in ourselves a time or two.
Even in a big, loud, indifferent city, salvation and expiation might be found in meaningful connections and a little introspection.
InnerMission Productions has chosen a small but challenging show for its first musical. While the characters are believably portrayed, the singing is variable. The quirky score is demanding, and at least one singer is way out of her range. Still, in the tiny space, Matthew Graber has directed well, and musical director Hazel Friedman accompanies with aplomb.
As a musical, it isn’t perfect, either in conception or in performance. But the issues raised resonate deeply.