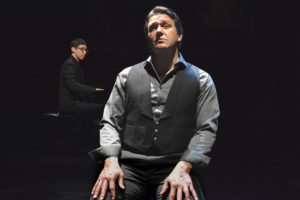 This may be Nathan Gunn’s first time Flying Solo in a play – but he certainly takes off and stays aloft. After all, he’s been onstage almost his whole life. But “Flying Solo” is more a concert or cabaret act than a play.

Gunn has a rich, gorgeous baritone (he’s been called a “bari-hunk”) and a charming personality. He seems like a genuinely compassionate, gentle, caring guy. But his stories just aren’t that compelling, at least as told here.

A dutiful son of Scottish descent, he rose from a classic Midwestern upbringing to become a world-class, internationally acclaimed opera singer who has made several wonderful forays into musical theater.

Clearly, he can move and act and convey completely credible emotion. But his memories, as recounted here, don’t always have a button or point.

The main thrust is a lifetime spent seeking approval from his father, but the search and details remain fairly superficial, and the ending leaves the tale peculiarly incomplete.

Gunn makes for delightful company, and it was a wise decision for writer/director Hershey Felder to allow him to sing complete songs and arias rather than a series of snippets.

Everything he sings is glorious, but standouts are his comic songs from Mozart’s “The Magic Flute” (backed by accompanying video of his Metropolitan Opera performance as Papageno), Rossini’s “The Marriage of Figaro,” and “C’est Moi” from Rodgers and Hammerstein’s “Camelot.” His aria from “Billy Budd” is heart-wrenching.

If he just introduced those numbers, with a little buildup and background, it would have been just as, if not more, effective as the current construct. He doesn’t have the hair-raising, harrowing and suspenseful story of Mona Golabek, for whom Felder wrote the spectacular “The Pianist of Willesden Lane.”

Gunn had, as he says at the outset, “a completely unexpected career in music.” But it was pretty much a smooth upward trajectory. He had no conflicts, disasters, losses or stumbling blocks along the way.

Many, many men crave approval from a non-communicative, undemonstrative father. While that arc is resolved, the final moments leave a large question hanging in mid-air (no spoiler here). That structure worked wonderfully well in Felder’s “Our Great Tchaikovsky,” which the multi hyphenate (writer-actor-director-composer and here, even scenic designer) premiered last year at the San Diego Rep, to deservedly great acclaim. But not so much in this piece.

The scenic design is simple: a quartet of screens at first sporting the Gunn Clan plaid (reflected beautifully on the floor in the lovely lighting design by Richard Norwood), and also displaying Brian McMullen’s illustrative projections.

The sound (Erik Carstensen) is crisp, though at the performance I attended, the body mic went out completely about half-way through the piece. Gunn, a consummate pro with a prodigious vocal instrument, didn’t skip a beat, and continued without amplification, which at first sounded a bit more muted, but actually served to bring him to us directly and more intimately. He re-adjusted his shirt multiple times, which was distracting, and he also fiddled with the microphone power pack presumably clipped to his belt in the back. But he made a dashing transition to his clan kilt, knee-highs and sporran.

Clearly, Gunn is a vocal superstar: an opera luminary and a marvelous interpreter of musical theater songs. He can carry an evening of entertainment with ease. But for this to be a gripping theatrical piece, he either needs to tell more captivating stories, or delve deeper into the ones he tells.