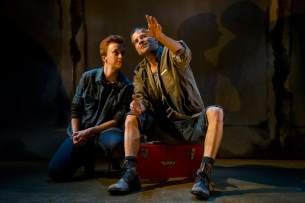 Orange Julius is a sweet, frothy drink. It’s also one particular Vietnam veteran, a victim of exposure to the toxic herbicide Agent Orange.

And one more thing. “Orange Julius” is Basil Kreimendahl’s episodic memory play, which was developed at the O’Neill National Playwrights Conference in 2012, became part of the La Jolla Playhouse’s DNA New Works Series, and is now having its world premiere at Moxie Theatre.

Nut is looking back on her life with her father, remembering snippets of conversations, things not said or done. She also imagines him in Vietnam, with herself as one of his foul-mouthed, tough-as-nails comrades. It was there that he experienced Agent Orange which, over the years, was to attack his mind and his body in various awful ways, rendering him weak, cancer-ridden, hallucinatory and at times, catatonic.

In her youth, Nut confesses to watching too many after-school specials. When she was 9 or 10, her parents separated for a while, and she didn’t see her father for a year; when he came back for a visit, she was afraid he was going to kidnap her. One time, when he put his hand on her knee in the car, she worried that his physical contact may have been “inappropriate.”

Now an adult, Nut is still trying to figure out her place in the world, vis-à-vis her father, and herself.  She identifies fluidly, as “gender queer,” the playwright has said. She dresses in combat fatigues. In her fantasy, her father was often frightened by the war. He claimed to want a nice, cool Orange Julius as soon as he got home – but even he after he was discharged, he couldn’t bear to leave his buddies – including Nut.

This whole series of jagged, fleeting recollections is Nut’s effort to understand her father, to re-connect with him, to re-live some of their experiences and maybe play them out more effectively. She has a mother and a sister – even a brother who never appears, and whom her father doesn’t even remember when he’s interviewed on video too late in his foreshortened life. There are stories of grandparents and addictions (hers, too) and an imagined fellow soldier. But they’re all peripheral. This is Nut’s story, her memories, her effort to solidify her history and her identity, so perhaps she can move on.

The Moxie Theatre performance I attended was received in a serious, somber way. But I was told that at other show dates, the audience laughed freely and frequently. Either way, under the meticulous, choreographed direction of New York-based guest director Will Davis, this is an intriguing, gut-wrenching, thought-provoking play. It’s also repetitive (those Vietnam sequences do go on… again and again), and the intermissionless 80 minutes can drag at times. It’s short, but it still needs tightening.

The cast is superlative, from Dana Case’s tight-lipped, taciturn mother to Wendy Maples’ jocular sister, to last-minute addition Steve Froelich, thoroughly convincing as the macho, F-bomb-spewing warrior. As Julius, Jeffrey Jones is, as has come to be expected, a mesmerizing presence, whether he’s expressing his fear in battle, his love of fishing — or he’s trapped in a glassy-eyed stasis.

At the center of it all is Rae K. Henderson, intense, complicated and completely in command as the confused, contrite, guilt-ridden Nut, whose recollections come in out-of-sequence fits and starts, toting up to a lifetime of fragments that haven’t gelled into a satisfying whole for her.

Julius’ decline and death were painful for both of them, for all of them. Nut keeps trying to make sense of something that made no sense at all. The Government hasn’t been much help at all.

Eerily, those Agent Orange ‘drops’ are beautifully realized as tiny, tinted feathers falling from the sky (scenic design by Victoria Petrovich). The sound (Emily Jankowski) and light (Jason Bieber) contribute to the sense of porous boundary between the real and the imagined.

There’s a lot to contemplate in this new work, on personal and political levels. And maybe, the night you see it, there’ll be laughter to wash down the heartache.

Performances are Thursday at 7pm, Friday-Saturday at 8pm, Sunday at 2pm. There will be a Q&A with the actors after the performance on Sunday 10/4