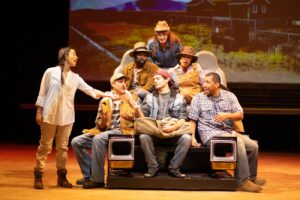 In his seminal, Pulitzer Prize-winning 1939 novel of the Great Depression and the Dust Bowl migration, “The Grapes of Wrath,” John Steinbeck called Route 66 “the Mother Road, the path of people in flight.”

In 2014, the National Steinbeck Center commissioned acclaimed Latinx playwright Octavio Solis to commemorate the 75th anniversary of the book’s publication.

He decided to pick up the story where it left off, revealing what subsequently happened to the justice-defending, rabble-rousing Tom Joad.

The story focuses on a young Chicano farmworker named Martín Jodes, who happens to be the last surviving relative of Tom Joad — except for the aging William Joad, who is dying and has tracked down Martín, since he has no other blood relation to take over the family’s beloved (and at times, deadly) Oklahoma ranch.

Both men are skeptical and untrusting, but Martín agrees to a road trip (he refuses to fly) in his rattletrap truck, to check out the 2000-acre farm.

Along the way, the two battle and spar, and accumulate additional passengers, a motley “family” of disparate types — queer, Black, Native American — which gives rise to more than one confrontation with the police (hot-headed, justice-defending Martín has had a ‘prior’ with the cops and incarceration, just like his ancestor, Tom Joad), and ample opportunities for racism, homophobia and police brutality to surface.

The play has a great deal to say, about the faded (or non-existent) American Dream, the value of road trips, and perhaps most disturbing, the unchanging view of police and many Americans about immigrants, migrants and the BIPOC and LGBTQ+ population.

As lyrical and poetic as Solis’s writing can be, the structure of the piece is problematic — with a good deal of the talented, versatile cast portraying a relentless Greek chorus, commenting on or foretelling the action.

They also push the vehicle, change the scenery, sing and dance (not always to excellent effect). It gets to be a bit wearisome after a while, despite Sam Woodhouse’s imaginative staging.

Some scenarios seem to repeat, and the sum total feels protracted and overlong. But the concept, writing and inventiveness are impressive.

Martín even gets a potent Mexican counterpart to Tom Joad’s iconic “I’ll be there” speech, about the tribulations of migrant workers. (“If you suffer to keep the land, you’re Mexican… If you work for pennies, you’re Mexican…”).

Mark Murphy, who spent 33 seasons with OSF, played Will in its premiere of “Mother Road,” and recently reprised the role in the Arena Stage production in Washington, D.C. He’s compelling and convincing as the hidebound, unyielding farmer who puts family and legacy above all, and reluctantly comes to learn that those terms are broader than he thought.

Yadi Correa, an alumna of The Old Globe/University of San Diego Shiley Graduate Theatre Program, is potent and formidable as the lesbian migrant farmworker, Mo.

Cedric Lamar, another veteran of OSF, as well as Off Broadway and Broadway national tours, who acted as movement and music coordinator and expert fight director, makes Brother James an otherworldly minister of the Earth.

Celeste Lanuza sparkles as Amelia, Martín’s one true love, and as Mother Earth.

All the activity is backed by a malleable scenic design and evocative projections (Charles Murdock Lucas), which illustrate the best and worst of America along Route 66. The lighting (Chris Rynne) and the original music and sound (Paul James Prendergast) provide additional texture and layering.

There may just be a little too much of everything here. The play could use some condensing, the production some simplifying. But as an apt sequel to Steinbeck’s historic original, the language and conception are searing and indelible.